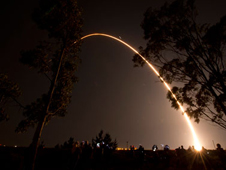 Click to enlarge
Liftoff of the NPP aboard a Delta II rocket at Space Launch Complex-2 at Vandenberg Air Force Base in Calif. Photo credit: NASA/Bill Ingalls 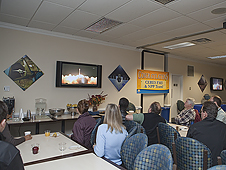 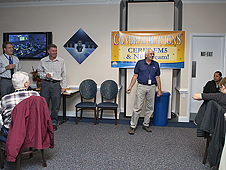 On Friday, Oct. 28, 2011, an arc of light illuminates the pre-dawn sky at Vandenberg Air Force Base, Calif., as a Delta II rocket flawlessly launched on schedule with the NPOESS Preparatory Project (NPP) spacecraft payload.

The instrument is the latest in a series that has studied the Earth's climate for nearly 30 years. Previous CERES instruments have returned data about the solar energy reflected and absorbed by Earth, the heat the planet emits and the role of clouds in that process.

"I'm very pleased and relieved the launch went so smoothly," said Langley's Norman Loeb, CERES principal investigator. "NPP is born. May she and the instruments she carries live a long and healthy life, and continue the observations of Earth's radiation budget so critical to understanding our climate system. Go NPP! Go CERES FM5!"

NASA began measuring and keeping a record of changes in Earth's energy in 1984, with a satellite instrument known as ERBE (Earth Radiation Budget Experiment) and then its successor, CERES.

CERES is one of five instruments on NASA’s first next-generation Earth-observing satellite, which is called NPP (NPOESS Preparatory Project). NPP is a critical first step in preparing for the next-generation Joint Polar Satellite System that will collect data on long-term climate change and short-term weather conditions, monitoring changes in the atmosphere, oceans, vegetation, ice and solid Earth.

Compiling a long record of data is important because CERES monitors minute changes in the Earth's energy budget - the balance between incoming and outgoing energy - that can lead to serious longer-term consequences, such as polar ice melting and rising sea levels, Loeb said.

Scientists study the planetary energy-balance that results from these interactions primarily because the Earth's atmosphere is influenced by the buildup of human-released carbon dioxide and other greenhouse gases.

"As the Earth undergoes changes in its climate, cloud properties may change in ways that may amplify or offset climate change," said Loeb. "Understanding the influence of clouds on the energy budget is therefore a critical climate problem."

The previous CERES instruments are in orbit aboard NASA's Aqua and Terra satellites. The instruments use a radiometer to measure the power of electromagnetic radiation being transmitted in the atmosphere.


In on online series, we've featured members of the CERES team, past and present, as we counted down to launch:
http://www.nasa.gov/centers/langley/news/researchernews/pplnews_CERESprofiles1.html