Grow Text SizeShrink Text Size
Humans and the Global Carbon Cycle: A Faustian Bargain?
Carbon, the building block of life, cycles through the land, ocean, atmosphere, and the Earth’s interior, in what is simply called the carbon cycle. As part of the carbon cycle, we breathe fresh oxygen produced when plants take in atmospheric carbon dioxide. We tap into carbon that has been stored in Earth's geosphere for millions of years when we heat our homes with coal and natural gas. We even find the cycle mentioned in the Bible, commonly quoted as saying, "from dust to dust." 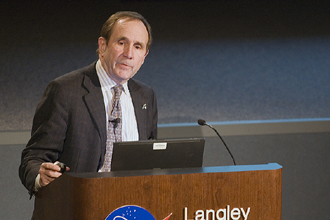 Image Right: Dr. Berrien Moore, gave an invited lecture on April 10 to NASA Langley employees on climate change and human impacts on the carbon cycle. Moore is a professor and director of the Institute for the Study of Earth, Oceans and Space at the University of New Hampshire. Credit: Sean Smith/NASA

Unfortunately, the life-sustaining processes of the carbon cycle may involve more problems than any of us ever bargained for.

Berrien Moore, professor and director of the Institute for the Study of Earth, Oceans and Space at the University of New Hampshire, gave a lecture at NASA Langley this week entitled, "Humans and the Global Carbon Cycle: A Faustian Bargain?" For Moore, and many of his colleagues, the issue of the carbon balance on Earth, specifically the human contribution to this balance, is of immediate importance.

Moore recently served as a co-chair of the National Academy of Sciences' National Research Council (NRC) science decadal study released in January 2007. The long-awaited study, "Earth Science and Applications from Space: National Imperatives for the Next Decade and Beyond," was produced by and for the Earth science community. He also worked on the Intergovernmental Panel on Climate Change’s (IPCC’s) Assessment Reports, the most recent of which was released at the beginning of this month. 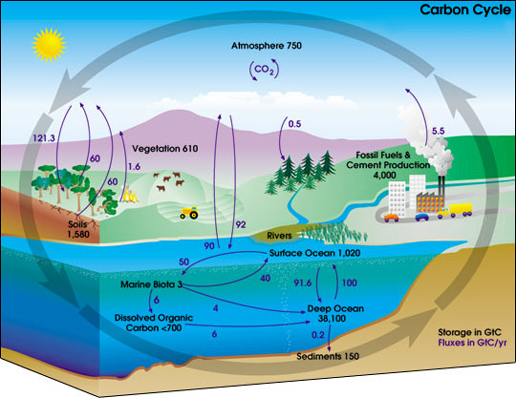 Image Above: An artist's rendering of the carbon cycle. In any given year, tens of billions of tons of carbon move between the atmosphere, hydrosphere, and geosphere. Human activities add about 5.5 billion tons per year of carbon dioxide to the atmosphere. The illustration above shows total amounts of stored carbon in black text (in gigatons of carbon), and annual carbon fluxes in purple text (Gigatons Carbon per year). Credit: NASA Earth Observatory

A significant finding of the decadal survey and the IPCC report is the increasing body of observations revealing that we are living in a warmer world. Specifically, global mean surface temperatures have increased half a degree Celsius in the past decade. Furthermore, the report states that there is new and stronger evidence that this warming is likely attributed to human activities -- like the burning of fossil fuels. Moore adds that increasing levels of greenhouse gases in our atmosphere, including carbon dioxide, are very likely causing the recently observed increases in average global temperatures.

"We have an enormous technological capability to fix this problem," Moore added. "But, we cannot fix it if we deny the existence of a problem."

The NRC decadal survey outlines a decline over the next five years in the number of satellite instruments to monitor Earth from space. Space-based observations provide information for tracking severe weather, understanding climate activity, and monitoring land use. One mission, an active lidar system, is suggested for monitoring carbon dioxide levels globally.

"An active lidar system will be able to provide important new information on carbon dioxide processes over all regions of the Earth and during the day and night," said Ed Browell, senior scientist in the Science Directorate.

This prospective satellite mission would build on NASA Langley's extensive lidar capabilities, and Langley would play an important role in both the instrument development and science of the mission.

"All status is showing that increasing carbon dioxide levels is a problem for the long term," said Moore. " That's why the missions suggested in the decadal survey are important -- we really need to know what's going on in the long term."

Dr. Moore's visit was at the invitation of the Langley Colloquium Committee and is part of the Colloquium and SIGMA series. He spoke at both the H.J.E. Reid Conference Center, as well as at the Virginia Air & Space Center, NASA Langley's official visitor center. While at Langley, Moore was hosted by Arlene Levine of the Science Directorate.