For Bushnell, Green Is Global, Personal
By: Jim Hodges

You ask Dennis Bushnell about the problems of climate change and you get an answer that addresses the world's issues. It's a prophecy of doom, the result of "a series of feedbacks which have been observed in previous massive extinctions."

"All of these things indicate that by 2100, we could be looking at an average temperature increase 6 to 14 degrees Centigrade," adds Bushnell, Langley's chief scientist. "At those temperatures, beyond 2100 all of the ice will melt and the oceans beyond 2100 could come up 75 to 80 meters, enough to drown the homes of some 2 ½ billion people globally."

But you also get a personal answer. When a man builds a house 30 years ago with double the insulation of an average home, with tight, energy-friendly windows, with water heated by solar power, with an oil heater he hasn't used this year because he hasn't needed to use it, you can tell he takes green energy personally.

There are things "you can go down to WalMart and buy," he says. "It's the PC version of energetics, instead of the mainframe."

It's why he's working with a Langley effort toward a "green" future. His is a call for ideas.

"We would like to incite brainstorming on the part of the entire field," Bushnell says. "I am soliciting, the (center) is soliciting any and all ideas, thoughts, comments about climate and energy. We want people to intuit, find, seek, identify, hunt an assembly of concepts of green energy generation, storage, conservation and transmission – the entire spectrum of approaches. We're looking for ideas."

To that end, Arlene Levine has been detailed from the Science Directorate to work with Bushnell at the Advanced Planning and Partnerships office.

"I'm available for intellectual discussion," Bushnell says, then smiles. "I'm a public utility for the (center). Arlene is the co-ordinator for 'Green.' She is working on green, writ large." 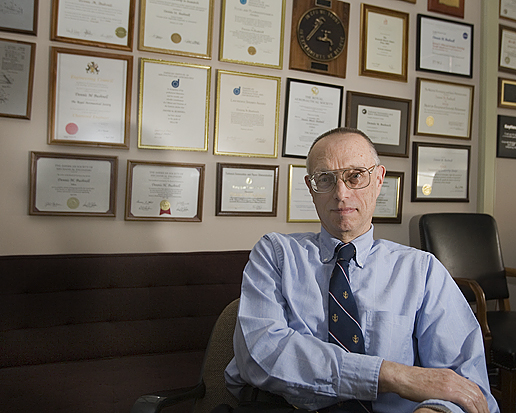 Image above: Dennis Bushnell sits in front of a wall filled with his awards and recognitions in Building 1212. Credit: Sean Smith

Levine is running a Web site, http://ii.larc.nasa.gov/view/Green to accumulate the ideas. The site also is accessible through @LaRC quick links. The button is "going green."

Besides the suggestion button, the site has information about upcoming speakers on the issue, such as an appearance at the Reid Center by Martin Hoffert, who will talk about "Energy Revolutions for the 21st Century." He speaks on April 1 at 2 p.m.

Also available are notices of "green" events, both on-center and off.

Levine suggests that there is no limit to the submissions.

The call is for more Langley people to be involved in what is part of a multi-pronged approach to the future.

At one point of the prong is ongoing mission work in climate and energy, such as the instrumentation projects in the Science Directorate, nanotechnology work in Structures and Materials and research in aircraft fuel consumption and emissions reduction in Aeronautics.

At another point is an effort to leverage that mission work.

"Boron nitrite nanotubes have the potential to reduce the weight of automobiles by a factor of three to five," Bushnell says. "The same is true with airplanes. So transportation fuel use would go way down."

The premise behind the "green" program is futuristic, though there is some for the here and now.

"There's some thinking on the field that the next administration may take climate and energy far more seriously," Bushnell says. "And so we're involved in an effort at a very low level to do a 'what-if-the-boss-asks' planning exercise.

"In other words, if the White House or the next administrator asks what could Langley do for energy, warming or whatever, it's nice to have an answer."

Experience tells him that it's a good idea. He cites the Arab oil embargo and oil shocks of the 1970s.

"At that time, the White House asked all governmental agencies to pony up," he says. "(At Langley), the White House called and said what can you do to reduce aircraft fuel use. We put together the aircraft energy efficiency program. … Practically overnight, the aero budget tripled because we had done our homework, because we were ready.

"So, it's sometimes good to work 'what-if-the-boss-asks' before he asks it. This is called due diligence homework."

Bushnell also points to a revolution in the making, one that will draw even more attention if his prophecy concerning oil comes to pass. "Peak, cheap" oil is done, he says. "So the projections are oil at $180 a barrel in two or three years, which equates to $6 to $8 a gallon for gas."

In that, his answers are both global and personal.

"Climate is potentially becoming existential," Bushnell says. "It's why I'm personally interested in trying to pursue this."