The young man on television wore a helmet with horns Wednesday.

"A lot of people around here have Viking blood in their veins," he said.

Then his middle school-aged classmates read aloud the story of Mars Viking, an ambitious and highly successful probe of the planet, led by NASA Langley Research Center 32 years ago.

That was how Jack Todhumter's class at the Newman Primary School in Rotherham, England, said happy 50th birthday to NASA. 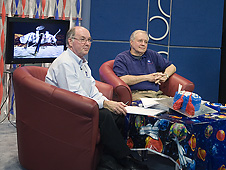 Linked with NASA Langley Research Center through the Digital Learning Network, the Newman School and the School of International Studies at Meadowbrook School in Norfolk held a virtual party. Meadowbrook's students left aside the Viking helmet, instead opting for hats and noisemakers.

At Langley, Bob Starr, of the Office of Education's Digital Learning Network manager; and Ed Prior, former assistant program manager of Viking, sat on a stage with a large birthday cake in front of them.

Starr had helped set up the birthday celebration for the entire agency at a meeting in San Antonio last summer, along with Marci Powell, the global director of higher education and corporate training for the U.S. Digital Learning Association. Caryn Long produced the party at Langley.

The 45-minute virtual parties began at 9 a.m., when schools connected to Kennedy Space Center heard about the Space Shuttle. The celebration continued throughout the day, ending in late afternoon when students connected to the Jet Propulsion Laboratory heard about the Phoenix Mars Lander.

Schools from across the country and from Canada, Australia, Japan, Mexico City, India, Slovenia and New Zealand participated.

At Langley, Starr and Prior were peppered with questions from across the harbor and across the ocean.

From the United Kingdom: "Do you think man will ever live on Mars?"

Prior: "I tend to doubt it." He went on to explain about the lack of a magnetic field and the amount of radiation on Mars, then allowed, "I have my doubts that we'll ever see anyone living on Mars, but there are some friends who think we can colonize it."

From Norfolk: "What kind of weather is there on Mars?"

Prior: "Temperatures range from minus-120 F to minus-20 degrees F. But it's a lot colder at the poles."

And on it went, questions about living on other planets, about the atmosphere on Mars. About Viking.

"You have to be prepared," Prior said later. "With kids and the Internet these days, you never know when you're going to get a question you might not be able to answer. That's why I bone up."

Starr broke up the give and take by giving.

"What are the names of the two rovers on Mars?" he asked the students of Meadowbrook School. There was a silence until Starr offered, "Spirit and Opportunity."

After Todhumter's class recitation, the students at Meadowbrook School offered a litany of NASA accomplishments, from John Glenn to Neil Armstrong to Sally Ride and beyond, enough to fill 50 years.

Students on both continents were introduced to Norbert, a plush "NASA Connect" mascot who, on Wednesday at least, was Karen Ricks, the DLN coordinator at Langley.

"Happy Birthday, NASA," the Meadowbrook children ended it with a cheer.

One that was months in the making.