Grow Text SizeShrink Text Size
William and Mary Professor: Worst Is Yet to Come for Chesapeake Bay
By: Matt Coffey

James Bauer pulls no punches when describing challenges presented by climate change: "(It's) not a future threat. It’s happening right now in Virginia."

Bauer, a professor at William and Mary's Virginia Institute of Marine Science in Gloucester, lectured on Tuesday at the H.J.E. Reid Conference Center. His research provides strong evidence of the impact of climate change in one of the areas he believes is most vulnerable: the Virginia coastline.

Bauer cited a history of increasing sea levels and sea temperature as the biggest factors shaping the changes of the Virginia coastline and the Chesapeake Bay area. 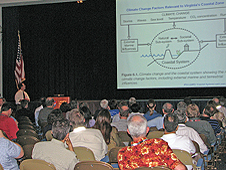 James Bauer speaks to a large crowd in the Reid Conference Center about the affects of global warming on the Chesapeake Bay region. Credit: NASA/Denise Adams

Click on the image for a larger view
Currently, the sea level in the bay increases at a rate of 3.5 mm per year. That is compounded by an average temperature increase of 0.3 Celsius per decade.

“The consensus view is that sea levels will rise about a meter in the next 100 years,” said Bauer. Despite his belief that it is a conservative estimate, he said it would mean that 1,000 square miles of current Virginia coastline would be underwater by 2100.

Alongside the impact on landmass, the effect on the ecology in the region produced by these changes is dramatic. High levels of rainfall have increased freshwater run-off into the bay, adding nutrients and decreasing PH levels.

Bauer predicts that marine species adapted to higher PH levels, such as the blue crab, will migrate from the bay to areas with greater PH levels. “If these species were to fall out,” said Bauer, “what are the implications on the rest of the food web?”

Bauer said species now found in more southern habitats could make their way to the bay. Increased jellyfish and trout species could greatly alter the bay’s ecological balance by depriving other juvenile fish of the food they need to develop.

Bauer believes it will be necessary to adapt quickly to changes that are happening rapidly in the bay. With rising tides and a changing food source, he foresees more issues on the horizon.

"Future projections based on our very best models and science predict the worst is yet to come," Bauer said.