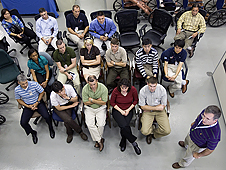 The 14 members of the Astronaut Class of '09 lesson on the history and purpose of the Gantry during a Thursday visit to NASA Langley. Credit: NASA/Sean Smith

Click image to enlarge
Jack Fischer flew F-22 Raptors at Langley Air Force Base but didn't have a clue about what was going on the other side of the fence.

Reid Wiseman flew F-18 Super Hornets at Oceana and had an idea about some of the things done at NASA's Langley Research Center, but had never been to the facility.

"My daughter's really interested in NASA," he said. "She loves the Air and Space Center. I'm not sure whether she liked that best or the ride through the (Hampton Roads) tunnel."

Fischer, Wiseman and the rest of the Astronaut Candidate Class of '09 -- the first such class in five years -- got an introduction to Langley on Thursday during a tour of the facility, and they were particularly awed while at the Gantry. Once in the class they instantly become part of NASA history and so are aware of those who went before them, beginning on April 9, 1959, when Alan Shepard, Gus Grissom, John Glenn, Walter Schirra, Scott Carpenter, Deke Slayton and Gordon Cooper were announced as the first American astronauts.


All of them trained at Langley.

"I wasn't alive for Apollo, but I know about it," Wiseman said, obviously impressed with the Gantry. "Everybody who's ever stepped on the moon trained here."

"I want to be in there," said Fisher after viewing a video of Neil Armstrong and others training on the facility.

It's not likely, at least for a long while, but the candidates are young -- Fischer is 35, Wiseman 33 -- so "who knows?" said Duane Ross, the manager of Astronaut Candidate Selection and Training at Johnson Space Center in Houston. "If they're around long enough, they could be part of Constellation."

For now, they're part of the astronaut crew that's being taught to work on the International Space Station. That training began with a bonding exercise in which they went through the Navy's Survival, Evasion, Resistance and Escape regimen in northern Maine.

From now until May, 2011, they will receive 39 weeks of space station systems training, plus robotics training, extra-vehicular activity training and some flight time for those who aren't pilots. "Oh, and we're going to teach 'em Russian," Ross said.

The Russian lessons replace the 54 weeks once allowed for space shuttle training, an unnecessary skill with the shuttle being retired. The new language skills will prepare the astronauts to travel in the Russians' Soyuz to the International Space Station.

The nine members of the U.S. contingent in the class were chosen from 3,535 applicants. Like so many other government positions, you could apply through usajobs.gov.

On Thursday, the class was introduced to Langley's work in aeronautics, atmospheric science and flight test hardware, along with the National Transonic Facility, structure and materials and the NASA Engineering and Safety Center. Added to that was another walk down the agency's memory lane, to the Hangar, where the Rendezvous Docking Simulator hangs from the ceiling, a reminder of those who trained in it, and of Buzz Aldrin, who joined Armstrong on the moon during Apollo 11, and who used the facility in research for his doctoral thesis.

"That we're able to be a part of all of this is inspiring," said Fischer, an Air Force major who is giving up a pilot's first love -- flying the Raptor -- for "something bigger: being part of helping the entire world."

Wiseman, a lieutenant commander in the Navy, agreed.

"It's a new challenge," said Wiseman, who learned of his selection to the class while flying close-air support to NATO troops in Afghanistan, and who continued to fly sorties until the Navy could separate him for astronaut duty.

A particularly select kid in a new job that could keep him busy for a long time.