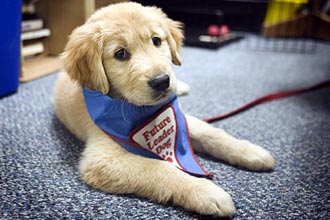 Image Right: Aries the puppy is a "Leader Dog in Training" who will be spending the next 12 to 16 months at LaRC. Credit: Sean Smith

Horowitz has been raising "Leader Dogs for the Blind" for more than a decade. "Having raised other service dogs, Horowitz wanted to continue in this benevolent activity when he began his job here at LaRC," explained Patricia Cowen, Safety and Facility Assurance Branch.

Horowitz came to Langley to ensure the structural integrity of the Boeing 757 flying laboratory, known as ARIES – Airborne Research Integrated Experiments System. To honor the aircraft, which has since been sent to Dryden and put in flyable storage, the engineer named the puppy Aries.

When Horowitz arrived on Center, he immediately started going through the appropriate channels for approval. After receiving the okay from his supervisor and co-workers, Horowitz began checking to make sure that there were no regulatory problems with bringing the puppy on Center. Aries received approval from the Office of Human Capital Management (OHCM), the Safety and Mission Assurance Office (SMAO), and the Langley Security Office.

Just to be extra careful Horowitz also got a legal opinion from the Office of Chief Counsel. "They informed him that Virginia State Law actually grants the same access rights to service dogs in training as applies to fully trained service dogs," said Cowen.

Horowitz put in a request for a female golden retriever and waited 18 months for her to arrive. He drove all the way to Rochester, Mich. to pick up Aries, then brought her back to her new home in Hampton Roads. Although Aries is the property of "Leader Dogs for the Blind," she will stay with Horowitz for about a year until she's well-socialized. 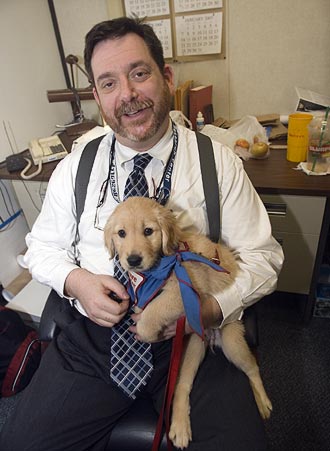 "It is very important that I get her out and about in society, so that she will be accustomed to being in and around people, noises and distractions," said Horowitz. "By acquiring permission to bring her on Center, Aries will be raised in an environment most like what she will be in as an adult."

While on Center, Aries will be wearing a blue coat with the words "Future Leader Dog" embroidered on it. Horowitz says that when he got Aries, he also got all the responsibilities that came with her.

"You will notice I carry around a back pack with food, water and sanitary clean-up supplies everywhere I take her," he said. "Being a responsible pet owner is as much a part of the program as everything else."

Horowitz also stressed that it is important that Aries is treated as a working dog. "She's a very cute puppy, but tempting as it may be, please do not try to pet her or distract her while she is wearing her blue coat. Wearing the blue coat is equivalent to her wearing the guide harness," he added.

After 12 to 15 months, Horowitz will return Aries to Michigan. Once back at "Leader Dogs for the Blind," Aries will undergo a formal training process to become a guide dog. By then, thanks to Evan J. Horowitz's dedication and NASA Langley's acceptance Aries will be well socialized and know basic dog commands.

For more information about "Leader Dogs for the Blind," please visit: www.leaderdog.org.