Like a candle on a cake, the crew module and launch abort system that Langley helped create now sit atop the Ares I-X flight-test launch vehicle.

The stacking of all five segments of the vehicle was completed this week on the mobile launch platform in Kennedy Space Center’s Vehicle Assembly Building. The crew module and launch abort system are part of the last stack added to the 327-foot rocket that also includes the spacecraft adapter and service module. 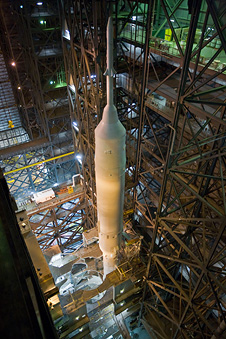 Click image to enlarge
"The whole team is ecstatic that the stack of our hardware is on top of the rocket,” said Jonathan Cruz, the crew module and launch abort system manager for Langley. “We are appreciative of all the hard work by everyone at Langley and by our partners at Kennedy, Glenn and Marshall. It took all of us working together to get us there.”

Kennedy, Glenn Research Center in Cleveland and Marshall Space Flight Center in Huntsville, Ala., are among the NASA centers that have critical roles in development of the next-generation of human-rated vehicles that will fly to the moon and beyond.

Ares I-X is scheduled for a 2 1/2-minute suborbital flight test October 31 from Kennedy. Langley made significant contributions to the development of its crew exploration vehicle by managing development of the launch abort system and designing and fabricating the crew module structure, which represents the size, outer shape and specific mass characteristics of the capsule.

The crew module and launch abort system also carry about 150 of the 700 sensors designed to capture aerodynamic data during the test flight. Langley is also providing the systems engineering and integration function for the entire project.

"More than three years of hard work with the NASA and contractor team has brought us to this historic moment," said Bob Ess, the Ares I-X mission manager who spent much of that time at NASA Langley. "This flight test is a critical step in continuing our design process for the Ares vehicle and the first flight for the Constellation program."

The flight test will allow NASA to check and prove hardware, analysis and modeling methods, facilities and ground operations needed to develop Ares I, the vehicle that will actually carry astronauts into space.

The test also will enable NASA to gather data during the ascent of the integrated stack, which will help guide the design of the Ares I rocket and crew exploration vehicle.