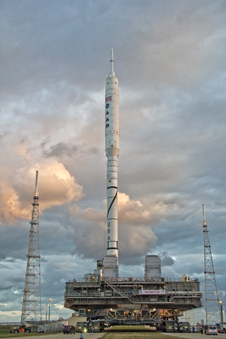 After an intense three-year effort, the NASA Langley Ares I-X team will be watching closely when the first developmental flight test of the agency's Constellation Program takes place early Tuesday at NASA's Kennedy Space Center. The launch window opens at 8 a.m. and closes at noon.

NASA Langley's Pearl Young Theater will be open at 7 a.m. Tuesday for employee viewing. If the launch is delayed, Wednesday and Thursday are also possible launch days. The launch window remains the same.

The Ares I-X flight test will gather important data for future space vehicles and is the first test of a vehicle in this configuration of solid booster at bottom and liquid propellant as upper stage. There will be 700 sensors on the vehicle collecting more than 900 measurements, providing engineering data to help correlate computer models and analysis with real world data.

The Ares I-X Systems Engineering & Integration Office, managed by Langley, has been responsible for integrating the vehicle's parts into a complete rocket and making sure they work together as a system to meet flight test objectives.

That has involved everything from high-level management to overseeing flight instrumentation to providing the structural, thermal and aerodynamic analyses for the hardware design and build. The office also managed the mass of the rocket and developed the trajectory and guidance, navigation and control math models used for flight.

NASA Langley also fabricated and assembled key parts of the rocket: the simulated upper stage and the simulated Orion crew module and associated launch abort tower. These elements are not active for this first, low-altitude test. But they did have to be built to exacting tolerances in order to accurately reflect the shape and physical properties of the models used in computer analyses and wind tunnel tests. This is critical for confidently comparing flight results with preflight predictions.

The unpiloted Ares I-X rocket will lift off from Pad 39B, recently modified for Ares-related flights. The tall, slender rocket will climb about 25 miles in a 124-second powered flight and coast for approximately four more minutes before splashing down 150 miles (241.4 km) east in the Atlantic.

"More than three years of hard work with the NASA and contractor team has brought us to this historic moment," said Bob Ess, the Ares I-X mission manager who spent much of that time at NASA Langley. "This flight test is a critical step in continuing our design process for the Ares vehicle and the first flight for the Constellation program."

The test is expected to gather information in six major areas: separation of the first and second stage, controllability of the vehicle, vehicle aerodynamics, assembly and launch operations, re-entry and recovery of the first stage and new design techniques.