Grow Text SizeShrink Text Size
The Module Is Gone, but the Job Continues for Cutright
By: Jim Hodges

When the Orion Pad Abort-I crew module headed toward the sunset in the belly of an Air Force C-17 on March 28, most at NASA Langley said goodbye and turned their efforts to building Pathfinder, another version of the flight test article.

But for Amanda Cutright, and a few others at Langley, the goodbye was more like "see you later."

Five years after graduating from Virginia Tech with a degree in mechanical engineering, oneyear after earning her masters degree in engineering management from Old Dominion University, Cutright has found a specialty, working on Pad Abort I as a mass properties engineer.

Her job carries the responsibility for determining the module's mass and weight, and also its center of gravity or balance. As the module and its Launch Abort System evolve into the vehicle that blasts away from White Sands, N.M., later this year, those properties will evolve with the package.

Cutright is charged with keeping track of that evolution. The process began with weighing each of the approximately 400 fabricated parts of the crew module at Langley, adding in the weight of more than 10,000 fasteners and assorted pieces of hardware. It will involve going to Dryden Flight Research Center, where systems are added to the module, and eventually, to White Sands, where everything is put together for launch. 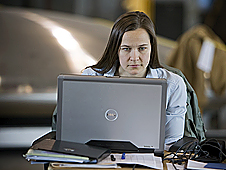 Amanda Cutright looks over some final details before the departure of the PA-1 simulator.
Credit: NASA/Sean Smith.

"We have a certain value we must meet," says Cutright, who works in Langley's Mechanical Systems Branch. "They need to know the center of gravity because that goes into flight dynamics and control, including the trajectory – or path – of the system. It also relates to the aerodynamics data: for example, the wind tunnel testing that they did out here."

The crew module has to be balanced so that it will achieve the desired flight path and angle of separation from the Launch Abort Vehicle, then a safe descent to a landing, all the way producing valid data. Because Pad Abort has as its goal saving the lives of an astronaut crew in case of trouble of the launch pad, the module has to separate from the Launch Abort Vehicle in such a way as to offer a safe flight and landing away from danger.

But the balance of weight necessary to facilitate that is both elusive and evolutionary, because of changes along the way. The entire Launch Abort Vehicle unit, which includes the Launch Abort System and crew module, including joining hardware, has one center of gravity. The crew module, after it separates from the LAV, has another. A forward bay cover deploys from the module, changing the center of gravity. The parachutes pop open, and again the balance changes.

"We have requirements at each of those stages," Cutright says of her role and that of her working group, which includes engineers from multiple NASA centers and mass properties engineers from Lockheed-Martin and Orbital Sciences Corp.

"They've been doing mass properties for years," she adds. "They are the experts, so it's been a great opportunity learning from them.'

The test weight of the module is to be about 18,000 pounds. That sent from Langley was about 11,000 pounds, and about 5,000 pounds will be added when Dryden Flight Research Center installs various systems that will provide data during the module's flight as well as a three-parachute system that will slow its descent from 5,000 feet up. The rest of the weight – about 2,000 pounds -- will be steel and aluminum ballast, arranged so that the module's mass will generate the desired center of gravity for the vehicle to provide the trajectory and angle of descent that will produce a safe landing.

"We had to design a ballast system," Cutright says. "It's an adjustable system so that we can make changes to meet flight dynamics requirements."

The adjustments are made installing ballast at available locations on mounting brackets that were installed in the crew module before it left Langley. A tool was developed by Analytical Mechanical Associates early in the program to help determine where the ballast should be mounted on the brackets.

It's all a balancing act involving engineering, algebra and trigonometry, and it began shortly after she became part of the design team more than a year and a half ago.

"One day I was asked, 'Can you look at the mass properties of the system,' and I thought about it a little while and said, 'Sure, I can do that,' " she remembers.

Instead, it's a learning-by-doing process, being conducted while working on he crew module and, eventually, two others for abort training and testing.

And while working with NASA Foundations of Influence, Relationships, Success and Teamwork, a program she was nominated to, along with Jose Cruz and Joseph Patterson from Langley. It's a year-long agency-wide leadership program broken down into time-consuming program requirements, not easy to balance with a time-consuming job.

"It's absolutely a challenge," Cutright says, "but both are important and very valuable, and without the support of family, friends and colleagues it would not be possible."

It's also ever-changing. She faces a mass properties mission for the next couple of years or more.

"We hope it will be easier, because I'll have less of a learning curve so we'll have the process better developed," Cutright says.

It's a learning curve that she's following all the way from inception of the Pad Abort-I crew module to its launch, late in the year in New Mexico.