Grow Text SizeShrink Text Size
For Alexandrov, a Triumph of the Right Brain
By: Jim Hodges

It began with a mention of New Scientist magazine in a blog. Natalia Alexandrov bought one, sat down to read and the muse immediately flew to her side in the sort of literary epiphany that every writer dreams about. 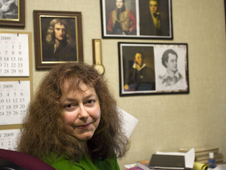 Natalia Alexandrov surrounds herself with reminders that art has a place in her life alongside mathematics and science. Credit: NASA/Brittany Green

"I saw this contest advertised, and the subject was very dear to my heart," she says. "It had to do with what we would need to do to no longer need animal testing. And on the spur of the moment, I had a picture in my mind."

Two hours later, she hit "send" on her computer's e-mail. In about a month, she learned that her 650-word essay, "Your virtual twin," had won New Scientist's "beyond animal research" essay competition and its 2,000 pound (about $3,300) first prize.

"It's my first paid publication," she says.

But hardly the first time she has written.

Alexandrov, a mathematician in the Aeronautics Systems Analysis Branch at NASA's Langley Research Center, with a PhD from Rice University, has written many scholarly papers in applied math and engineering optimization. She also is writing two novels, reads poetry and just about any book of prose or history she can get her hands on, loves to travel and hike.

Russian-born and in the U.S. since childhood, she enjoys movies about Russia, among a multitude of genres, but she much prefers “The Good, the Bad and the Ugly" to "Dr. Zhivago."

The left-brain logic of a mathematician and the right-brain intuition of an artist both were tested one week with a large volume of tedious paperwork, and she decided that inspiration was needed. Several pictures went up on the wall alongside her desk.

The math side is represented by a picture of Isaac Newton. "He was a very cool guy," she says. "He had lots of interests, other than just falling apples."

The art is represented in pictures of Antonio Vivaldi ("my favorite composer"), Russian poets Alexander Pushkin and Mikhail Lermontov and English romanticist Lord Byron, along with Sir Walter Scott.

A reproduction of a painting by Belgian surrealist René Margritte is there, as is a map of ancient Rome, along with a small picture of a blue bird at eye level when she sits.

By day, she works on mathematical methods for design optimization, seeking solutions to make the synthesis of different disciplines smoother in designing airplanes, for example. And she also seeks to design beyond the individual machine or vehicle, to entire air transportation systems.

"The salient characteristic is that these systems, these huge systems, have never really been designed," Alexandrov says. "They evolve. The problem is that evolution can lead you into a dead end. The question is how do you design a system actively, rather than just let it develop."

By night, when she can let the left brain relax -- with her work, it's not easy -- she lets loose the right.


A quiet night in December 2050. Small town anywhere on Earth. In the hospital, little Peter has just made his appearance in the world. As the happy family takes pictures of mother and baby, the thought that his birth is incomplete is far from their minds. And the birth will not be complete for a few hours, until hundreds of miles away, his virtual twin is born.

The essay involves building a computer model that is an exact twin. It's science fiction but not science fantasy.

"Because I am a computational mathematician, I can't help but think of this very nice future," Alexandrov says. "What I wrote is nowhere near possible right now, but it is totally realistic in my opinion."

Building a systemic computational physiological and biochemical model of the entire human is the key, she adds. Once accomplished, doctors can try medications on the model before introducing them into the human. The model would serve both for pharmaceutic development, replacing animal testing, and for trials before administering drugs to individuals.

To some extent, cutting edge cancer treatments can already be considered personalized medicine as they take into account individual genetic profiles. "There is a long way to creation and integration of all needed models," Alexandrov says, "but what I've described (in the essay) in principle is totally doable."

As a postscript, on reading the essay, several researchers in computational and environmental sciences got it touch with offers of collaboration toward the system described in the essay.

Alexandrov's academic training was a mix of mathematics, science and humanities. "I took one class in literature (at Rice), which I found particularly helpful because my writing was taken apart," she says. "I loved it. It woke up critical faculties in my thinking about writing."

Since then Alexandrov has worked at her writing and has occasionally attempted to make scholarly papers more entertaining. "I don't know why scientific papers should put one to sleep," she says. But scholarly publishing rules insist on a dry narrative and tend to win at the end of the refereeing process.

She still remembers science teachers telling her "Anybody can write. You must go into science," while humanities teachers insisted that science is dry and unimportant. Alexandrov believes the boundaries are not that sharp.

"I am from the area, mathematics, that inspires almost supernatural terror in people," she said. "It's the subject that people probably hate most, even many engineers.

"But it's a magical subject if it's taught the right way, if it's connected to nature. It can be taught in an absolutely inspired way, and I must say I've had inspired math teachers."

And now there is a reward. "Your virtual twin" is definitely a product of both left and right brains, and the result is a paid publication and a fair amount of satisfaction.