Air Power Over, In and Around Hampton Roads
By: Denise Lineberry

Airplanes are coming out in full force this week for Hampton Roads residents' viewing pleasure – in the sky, on the ground and even on the big screen.

NASA Langley will tow three of its planes, the OV-10 Bronco, the UC-12 and the Columbia 300, from the hangar to Langley Air Force Base (LAFB) for the "Airpower Over Hampton Roads" show this weekend.

Luci Crittenden, senior flight operations engineer at NASA Langley, will accompany the planes and tell their story to the thousands of visitors the air show receives each year. It's a task that she has handled with pride for more than 12 years. 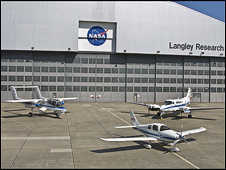 NASA Langley's OV-10 Bronco, the Columbia 300 and the UC-12 will leave the hangar and head for Langley Air Force Base for a weekend at "Airpower Over Hampton Roads." Credit: NASA/Sean Smith


"These airplanes give a variety of what type of work we do," Crittenden said.

The air show veteran of the group of three and a veteran in its own right is the OV-10 Bronco. The first Air Force OV-10As destined for combat arrived in Vietnam on July 31, 1968. A total of 157 OV-10As were delivered to the Air Force before production ended in April 1969.

"The OV-10 is the most popular plane, by far, that we take," Crittenden said. "People really connect with its history."

NASA Langley's OV-10 Bronco has been housed and flown out of the center since Sept. 3, 1991. Researchers have used it for wake vortex studies and atmospheric science research.

The newest plane at NASA Langley, a former U.S. Navy UC-12B, will be a newcomer to the air show. Once used to fly officers in and out of the Washington, D.C. area, the airplane was stored among about 4,200 others at the Aerospace Maintenance And Regeneration Center -- commonly called "The Boneyard" -- in the Arizona desert when it was discovered by Research Services Directorate personnel looking for a plane for science missions.

It arrived at Langley in the summer of 2007 and is being used primarily for atmospheric science research. This summer it will continue testing a laser instrument that is being developed to study carbon dioxide in the air.

The third aircraft going to the LAFB air show, the Columbia 300, arrived at NASA Langley in 2001 as part of the Small Aircraft Transportation System project. It is one of a number of newer generation small planes that incorporate NASA technology pioneered at Langley. Technologies range from modified wing leading edges for spin resistance to energy-absorbing composite airframes to state-of-the-art cockpit systems.

Housed under a sunroof at the first stop past the entry, the airplanes draw attention from adults and children alike. Crittenden is excited about the extra amount of outreach material available this year. "We have coloring pages and the children can take pictures in front of the planes with a flight suit cut-out," she said.

"I love meeting people at the air shows," Crittenden said. "It’s a good way to get the word out to the kids and prepare the next generation."

If you can't wait for the weekend to get your full aviation fix, this week … April 19-23… is the Hampton Roads Air Force Week's "Air Force Exposition" at the Virginia Air and Space Center (VASC).

Langley F-15 pilots, the F-22 Raptor Demonstration Team and the 71st Fighter Squadron, also known as the Ironmen, one of three fighter squadrons assigned to the 1st Fighter Wing, will be available to speak with visitors to the Virginia Air and Space Center, which is offering free admission and free viewing of more than 15 exhibits and the IMAX film, "OPERATION RED FLAG."

For more information about the "Air Force Exposition" at the VASC, please visit: www.vasc.org.