Grow Text SizeShrink Text Size
It's a Bird. It's a Plane. It's a Student?
By: Sasha Congiu

What if you could choose to do or be anything in space? Would you do finger push-ups, spin infinitely, be Superman or Luke Skywalker? Duncan Miller, from University of Michigan, and Ryan Coder, from West Virginia University, were given the opportunity to do and be all four.

Miller and Coder were selected to be parts of NASA's Reduced Gravity Student Flight Opportunities Project. The project allows undergraduate students the opportunity to propose, design, fabricate, fly and evaluate a reduced-gravity experiment of their choice over the course of six months. 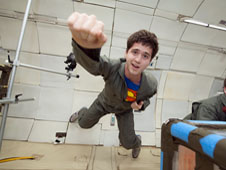 Click to enlarge
Duncan Miller shows his Superman moves on flight day. Credit: NASA.
"Colleges from across the U.S. submit a proposal to NASA detailing what their experiment is trying to accomplish -- general objectives, success criteria, technology they’re trying to advance, etc," Miller said. "Michigan has a reputation of quality projects which started in 1995. This year was the 15th anniversary of our Reduced Gravity Opportunity project."

Flying from Johnson Space Center in Houston, Coder and Miller participated in a June 17-26 Zero-Gravity (Zero-G) Experience and flew on a specially modified Boeing 727. During the flight, parabolic arcs are performed to create a weightless environment allowing passengers to feel as if they were in space.

"I was writing down everything I could possibly do in Zero-G so when I got up there I was just ready to go," said Miller. "I was flipping around, walking on the wall, walking around the cabin. I had a superman shirt on, I was doing finger push-ups and doing infinite spins."

Participating in the Zero-Gravity experience, which was featured on NBC's The Today Show, Biggest Loser and The Apprentice, allowed the students to test their experiments, mimicking a space environment.

Each school had its own project to test.

Coder and his team experimented with electromagnetic control of propellants sloshing. They proposed to use magnets to control the sloshing in the fuel tank. The magnetic force would take the place of the gravitational force here on Earth and act as a damper, resulting in the fuel oscillation being stopped. They had a couple of tanks, including tanks that displayed the 2-D fluid movement.

"Half the tanks had permanent magnets and some did not. This way we could see the difference in, yes, the magnetic force is damping the sloshing force and making it stop," Coder said. They saw positive results quickly. 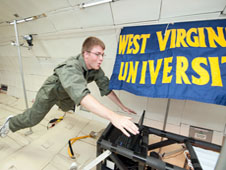 Click to enlarge
On flight day, Ryan Coder’s expression says it all. Credit: NASA.
Miller, the structures lead, and his team worked on retesting proposed diagnostics to measure the performance of the Nanoparticle Field Extraction Thruster (NanoFET). The thruster is basically electric propulsion.

"(In) electric propulsion, in theory, you carry way less fuel," Miller said. "Then you have more space for scientific instruments and people, and it's supposed to be faster. You don't need nearly as much fuel to travel."

The flight is also known as the “vomit comet” because of some people feeling nauseous or getting sick on the flight. Coder and Miller weren't affected.

"We did some cool things in the microgravity. We took medicine before hand to help prevent sickness and it made your mouth very dry," Coder said. "So we had bottles of water, and we were playing with the floating water. Since we kind of floated around, it was like being Luke Skywalker. It was pretty fun."

Miller spoke of knowing two students who got sick during the flight, but on his particular flight no one got sick.

"I was so excited to be there. I was not sick at all. I was having a blast," Miller said.

Before their actual flight, NASA prepared the students for worst-case scenarios. A couple of days earlier, they went through hyperbaric chamber testing in case the cabin lost pressure.

"There's not as much oxygen in the upper atmosphere. If your body is not getting enough oxygen, it’s called hypoxia," said Miller. "We needed to recognize the symptoms of hypoxia and be able to monitor ourselves and understand what to do and how it would affect us mentally."

After a 4 1/2-hour lecture about gas laws, basic chemistry and motion sickness, they were given masks. For 30 minutes, they were fed pure oxygen to get them ready for the chamber. The chamber was equivalent to going up 25,000 feet.

When the students were in the chamber, it was difficult to breath. For five minutes, they were asked to take their mask off.

"After about 10 seconds you get used to it. For me it wasn’t too bad," Coder said. "At the end I got kind of light-headed and by the end I was just staring at a fixed point. One kid in my chamber passed out."

In addition, Miller described how he got a little nervous when he had to take off his mask because another student in his chamber passed out. 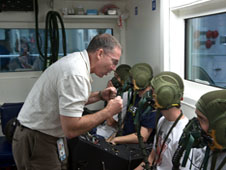 Click to enlarge
Duncan Miller listens to his trainer during hyperbaric chamber training. Credit: NASA.
"It was kind of nerve wrecking because I had to go and take my mask off after him and all that was going through my head was 'don't pass out, don't pass out!' " said Miller. "When you breathe in the air it feels like normal air. You start to feel a little tingly."

During the chamber testing, Coder and Miller were given a small test to see how their brain reacted to the lack of oxygen. They were given easy math problems and random trivia questions.

"One of the questions was what does NASA stand for? I was like I work at NASA, piece of cake, National Aerospace Space Agency. I didn’t look at it until after. I was like 'wow,' " Miller said laughing at the error.

Along with the achievement of testing their projects and receiving data, Coder and Miller said the highlight of their experience was the actual flight. Coder also described how the tours were a favorite.

"My favorite experience was the flight. It was one of the best days of my life," Miller said. "U.S. soccer had won, and then we went out and flew and doing all that cool stuff and things were working and we were getting data. It was great."