Grow Text SizeShrink Text Size
Women in Aerospace: Are We There Yet?
By: Denise Lineberry

From a dozen round tables in NASA Langley's Reid Conference Center, employees looked toward a big screen, which aired a panel discussion taking place at NASA Headquarters about women's roles in workplace innovation. 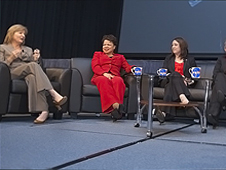 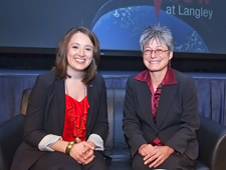 During the discussion, Leila Vann (right), director of science at Langley, urged going after what you believe in. Adding to that, Lindsay Rogers (left), a management and program analyst for Langley's Science Directorate, encouraged confidence. Credit: NASA/Sean Smith

"NASA is the largest employer of female STEM professionals," said Lori Garver, NASA's deputy administrator. "There are more than 6,000 women working at NASA in a workforce of about 18,000."

Garver shared that within the past decade, women supervisors have increased by 59 percent, aerospace engineers by 76 percent, leadership by 29 percent and engineers by 20 percent.

This was good news – it was proof of progress. But was it enough progress to settle?

"I think we should celebrate the strides, but realize we have some distance to go," she said. "We are one-half of the population, but only one-third of the [NASA] workforce."

NASA centers all over the U.S. are celebrating Women’s History Month. And several of those celebrations, took place on March 8 for International Woman’s Day.

"We are the stories we tell about ourselves," said NASA Langley’s Center Director Lesa Roe as she opened up Langley’s daylong event. Roe is the agency's first and only female center director.

Roe relocated to couches at the front of the room, along with four other women from NASA Langley, and their moderator, Barbara Hamm Lee, host of Another View on WHRO-TV. It was time for "The Langley View.”

"There is no magical path. It's the journey to do the things you’re going to do," Roe said. "I always thought I could do anything I wanted. It never occurred to me that I was the only woman in the room."

They all agreed that passion and drive played a major role in their workplace success.

"When there was an opportunity, I'd go for it," said Jill Marlowe, Langley's director of engineering. "Then, I did the best that I can."

Marlowe was engaged at a young age. While on a church retreat with her fiancé, she learned that he thought they would have six children … and that she would be staying home with them.

But Marlowe's plan was to receive her Master's in mechanical engineering and a degree of engineer in civil and environmental engineering from George Washington University when it was the Joint Institute for the Advancement of Flight Sciences (JIAFS). She did just that and they were married and had three children.

While Roe and her husband were on an airplane, eloping, they shook hands and agreed on one child. Three children later, she learned that plans change.

"I've heard that you can't have it all, but we have it all," Roe said in reference to her family and her career.

Leila Vann, director of science at Langley, urged going after what you believe in. Adding to that, Lindsay Rogers, a management and program analyst for Langley's Science Directorate, encouraged confidence.

The special guest to the program was Samantha Segall-Anderson, president of Women in Aerospace (WIA), who hopes to help start a Langley chapter soon. In 1985, Women in Aerospace started as a small group at dinner and has now grown to more than 600 individual members and more than 60 corporate members, both women and men, who share an interest in aerospace.

Roe broke away from the panel to host a discussion on NASA's Digital Learning Network (DLN) to thousands of students and early career professionals, encouraging women to enter and succeed in the field of aerospace. Meanwhile, employees in the Reid Conference Center attended a lunch and learn session that promoted professional development and introduced resources for work and life.

Employees could take away that, no matter the distance remaining, it pays to have an equal view.