In his mind's eye, Bill Vass sees swarms of yellow surfboards in an ocean, with sensors and solar panels on their decks and queer-looking gliders tethered 22 feet below each. The gliders look like Venetian blinds.

The surfboards are taking readings: water temperature, salinity, wave height, speed of current, the size of an oil slick or algae bloom, the presence of shrimp, of fish that feed on shrimp -- anything you can think of and find a sensor to measure. 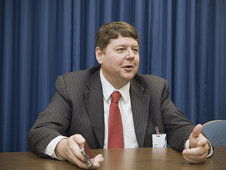 "What we're entering is a stage in man's development. You know we've industrialized land, and now we're going to industrialize the ocean. And the challenge with industrializing the ocean is just a very harsh -- and there's that energy issue -- it's a very harsh world to operate in. And a very expensive world and puts people's lives at risk. We're not designed to work on the ocean; we're designed to work on the land. And so it's better to have robots do some of those things than have humans do it in a lot of cases.

I think -- it is the statistics I've heard -- is three trillion dollars a year move over the ocean or come out of it? The majority of the world's commerce, a huge amount of the world's oil and minerals and fisheries come out of the ocean. It's just a lot of money.

And as the old business saying goes -- you manage what you measure. So you got to get out and measure it.

That's what we're about at Liquid Robotics is getting out and measuring it."

Not bad for watercraft that the Coast Guard classifies as "marine debris."

The surfboards are called Wave Gliders, and they are manufactured by Liquid Robotics, a Silicon Valley firm riding a wave of electronic capability that comes at the right time for exploration of 71 percent of the Earth's surface.

"What we're entering is a stage in man's development where, we've industrialized the land, and now we're going to industrialize the ocean," Vass said before speaking to an assembly at the April Colloquium on Tuesday at the Reid Conference Center at NASA Langley.

"The statistic I've heard is $3 trillion either moves over the ocean or out of it," Vass said. "The majority of the world's commerce, a huge amount of the Earth's oil and minerals and fisheries are from water. That's a lot of money, and there's an old business thing that you manage what you measure. That's what we're all about, measuring it."

They're doing it because they've managed to beat the most limiting factor in unmanned sea vehicles: energy. Roger Hines, a mechanical engineer who founded Liquid Robotics, tried batteries and solar panels, both of which have been -- and continue to be – tried. Hines found what everybody else has found: mass beats you. "It's an energy problem that can't be solved," Vass said.

Hines' answer was so simple that you wonder why it took 5,000 years to find it. By using a wave's up-and-down action to power an underwater glider to pull one on the surface, Hines took inexorable, undepletable energy and turned it into propulsion.

The 250-pound glider isn't going to set any speed records. It moves along at 1 1/2-2 knots per hour, but it does so inexorably. Four gliders recently sailed from San Francisco to Hawaii in just over three months, and they and being split into two pairs for trips to Japan and Australia.

During the trip, one of the gliders was attacked by a shark. The 22-foot tether has a mechanism to part if the Wave Glider becomes entangled with a whale, and it’s programmed to avoid ships.

With the power problem solved, Liquid Robotics next turned to what to do with the -- well, it doesn't really qualify as a vessel, according to Coast Guard definitions.

"We spent a lot of time with the Coast Guard, and they said it doesn’t carry crew and it doesn’t carry cargo, so it can’t be classified as a vessel," Vass said. "Originally, they wanted us to put a light on the front and a flag on the back. Then they said you’re not allowed to put any lights on it at all because it’s not a vessel. … So we’re currently classified as marine debris."

Micro-technology stepped up with ways to use the “marine debris.” Liquid Robotics can mount any one or several from among 65 sensors onto the Wave Glider and it is testing 152 others. Suddenly, even the most complex measurements seem possible with a craft not much bigger than a bathmat.

“We're working on putting a mass spectrometer on it," Vass said. "We're working on a full genetics lab that will suck in salt water and count the microbes and break down their DNA in real time.

"That used to take a whole building, and now it's going to be on a three foot by two foot container on a wave glider."

The possibilities are endless – and daunting.

"I think our biggest challenge is that so many come to us with sensors, wanting to put sensors on the vehicle," Vass said. "Our work is in integrating those sensors. The variety of things is just astounding."

The company, Vass emphasized, is not in the business of building Wave Gliders for sale, in part because of the training involved in using it.

It’s building about 40 a month now and would like to build more. That’s where swarming comes in.

"There are a lot of sensors on land," Vass said. "If you go to the ocean, there’s one sensor for an area the size of California. Imagine trying to do weather prediction for California if you had only one temperature and humidity reading for the whole state.

"What we bring is the ability at a low capital cost to potentially put thousands of these sensors in the ocean, and since the majority of weather conditions of the world come from the ocean, we can do much more accurate weather prediction, more accurate current information, swell information."

The imagination reels, and that’s the idea.

"Our competition is really the status quo," said Vass, whose company has about 80 employees. "Really, what we are is a micro-sized ship with unlimited fuel that you can send anywhere and re-task when you want to re-task it. You can cross whole oceans."

Taking measurements along the way.