When Karen Jackson, Virginia's deputy secretary of technology, visits NASA's Langley Research Center, there is always a sense of familiarity. Her mom worked at the center for 32 years and Jackson spent much of her childhood in and around Langley.

"It's very exciting to come back in my new role, to help transfer technology to industry and universities and to develop partnerships,” Jackson said at NASA Langley's 95th Anniversary VIP Day on Thursday. "I want to help build bridges to make NASA more accessible, and make them a partner for what we are trying to do in the Commonwealth."

Jackson, who also serves on the Governor’s MODSIM Panel, was excited to take a first glimpse at some of the technology that NASA has to offer.

"It's all about trying to see the technology commercialize, and then to take that technology to businesses as a potential asset," Noel said.

Both DeWitt and Noel spoke of the importance of NASA Incubator Programs, which are designed to nurture new and emerging businesses with the potential to incorporate technology developed by NASA.

"It's about taking the technology that is happening here, transferring it, and expanding it throughout the region," DeWitt said.

More than 100 guests including representatives from local, regional, state and federal government, industry representatives, and colleagues from other NASA centers, broke into three separate tour groups and visited facilities that would be of most interest to them. 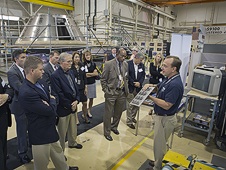 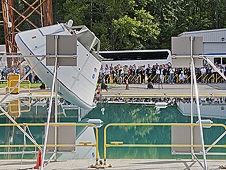 In one area of the facility, Tom Burns held up a test rig and explained that the manufacturing process, called Selective Laser Melting (SLM) Sinterstation, provided the rig a strength of 16,000 pounds per square inch. In another area, Mike Powers talked about the glass bead heat ablasion technique, which was created at NASA Langley about a year ago. It has been used on NASA’s Mars Science Laboratory, HIAD (Hypersonic Inflatable Aerodynamic Decelerator) and the Crew Exploration Vehicle (CEV).

Bill Seufzer shared a story about a request he received from an aerospace company to build a titanium part. Rather than starting with the 400-pound build of titanium that they provided him, he used NASA Langley’s Electron Beam Freeform Fabrication (EBF3) technology to build up the part from a plate. He built the piece using 23 pounds of material, which saved 233 pounds of material and costs. And instead of the process taking 18 months, it only took him one day, he explained.

Tim Osowski, a scientist from Orbital Sciences Corp. who is already working with the center through a Space Act Agreement to develop the concept for a High Energy Atmospheric Reentry Test (HEART), which falls under the broader HIAD project at Langley, remained tuned in for new opportunities.

As guests toured the 14 x 22 Subsonic Tunnel they learned about testing capabilities and specialized test techniques. Langley's wind tunnels have conducted projects for NASA, industry, the Department of Defense and academic partners within the research and development communities.

From Langley's Science Directorate tours, guests learned about SAGE III and Applied Sciences such as air quality, renewable energy and aviation weather. Others who had a particular interest in the sciences, like representatives from the National Oceanic and Atmospheric Administration (NOAA) and the Joint Polar Satellite System (JPSS), learned about the CLARREO (Climate Absolute Radiance and Reractivity Observatory) Calibration Demonstration System (CDS), CAPABLE (Chemistry and Physics Atmospheric Boundary Layer Experiment) and the Atmospheric Science Data Center.

For all, the day ended with a splash as the Orion test capsule was dropped into the water basin at Langley's Landing and Impact Research Facility. The test impact conditions simulated all parachutes being deployed with high impact pitch angle of 43 degrees, no roll, with 27.8 miles per hour vertical and 38.8 miles per hour horizontal velocities.

"The test was a high velocity case at the maximum design impact angle representing worse case conditions for an abort scenario in rough seas," Robin Hardy, an aerospace engineer, explained to the group.

As VIP guests stood at a safe distance from the basin, they were reminded that bridges could be built from both sides.

"Langley has a long history of working with a diverse network of partners from start-up firms to academia, to large corporations and other government agencies," said Center Director Lesa Roe. "We believe that our future depends on these collaborative solutions, and today is an opportunity for all of us to explore challenges and how we might work together to solve them."