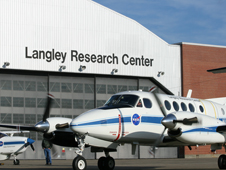 Click on the image for a larger view
After three days of scrambling, a NASA Langley team successfully captured thermal images of the shuttle Discovery on re-entry as it whizzed past the Midwest going more than 18 times the speed of sound.

The team is part of the Langley-led HYpersonic THermodynamic InfraRed Measurements (HYTHIRM) project.

Langley's UC-12 aircraft and its flight crew of pilot Rick Yasky and crew chief Rob White had positioned one team of researchers and its ground-based optical imaging system in Grand Forks, N.D. They were there to try to catch images of the shuttle as it went by at more than Mach 20 during its first landing opportunity a little after 7:30 a.m.

Unfortunately, fog at the Kennedy Space Center landing site in Florida meant Discovery couldn't land the first time.
So the HYTHIRM team went to Plan B and hoped for good weather for the second attempt as the shuttle flew an entirely different path. Less than an hour after Discovery landed, project manager Debi Tomek sent out these words in an email: "The HYTHIRM team is pleased to announce that we have been successful in capturing thermal imagery on Discovery as it made its re-entry into Kennedy Space Center. 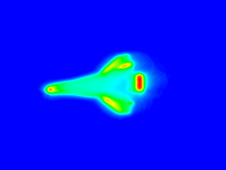 This is what the heat signature of the shuttle Discovery looked like on re-entry after mission STS-128 in Sept., 2009. Credit: NASA.

Click on the image for a larger view
"This data collect was conducted with the land-based asset known as the Mobile Aerospace Reconnaissance System (MARS) that was positioned approximately 35 nautical miles from the ground track in Hot Springs, Ark."

The team in Arkansas reported that it took the thermal image of Discovery as it was zooming past at Mach 18.5.

In the past, the HYTHIRM team has relied on a U.S. Navy NP-3D Orion aircraft, equipped with a long-range infrared optical system called "Cast Glance," to remotely monitor and record heating on the shuttle's lower surface using a long-range infrared camera. But that plane, which can fly 20 to 30 miles under the orbiter, is supporting a Department of Defense program elsewhere.

The unavailability of the airborne "Cast Glance" system and the iffy weather added new logistical challenges for the HYTHIRM team, but as Tomek ended her thank you message, "All deployed teams are packing up and heading back to LaRC for calibration of MARS. We have quite the story to tell with this data collect!"