In a backstage area of Christopher Newport University's Ferguson Center, more than 30 speakers and band members mingled and rehearsed as they prepared to step into the spotlight of TEDxNASA.

In less than 18 on-stage minutes, each speaker summed up what mattered to them.

Meanwhile, it was up to more than 1,700 guests in the three-level theater, and the worldwide live stream listeners, to discuss what matters next.

The anticipated result of the one-day, interactive conference held on November 4 was to promote the exchange of ideas worth spreading from the quick and varied presentations.

This was the second annual pairing of TED and NASA, again co-hosted by NASA Langley and the National Institute of Aerospace. According to Rory Collins, one of the event coordinators, this year's conference drew "hundreds more" than last year's. Her acknowledgement of the event's success didn’t go without credit to the 60-plus volunteers from across the NASA centers that made it possible.


Bobby Braun, NASA's Chief Technologist, stepped onto the stage with a confession. He was 4 years old when Neil Armstrong walked on the moon, winning, at the time, a race with the Soviet Union to do so.

So he asked the audience, "What is the equivalent of my generation's Space Race?"

He acknowledged a desire for NASA to explore Mars, but talked about the need for new technology to do so. With current technology, Braun said, "it would take 37 Saturn V rockets to take everything along" to mount a human mission to Mars.

About 15 minutes later he provided this conclusion: "It's really the same as it always has been. It's not about dates and destinations, it's about the cause."

For Braun, what mattered were the everyday society advantages that result from leadership in technology.

For Sean Forbes, a musician who experienced permanent hearing loss at the age of 9 months, making music accessible to all audiences mattered most. Finding answers to questions about climate change mattered to Bruce Wielicki, a NASA Langley scientist. 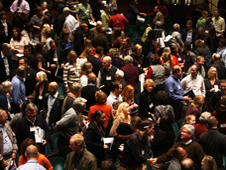 The sharing of ideas at TEDxNASA began inside the theater of Christopher Newport University's Ferguson Center. Credit: NASA/Sean Smith
"The Earth has a fever," he said, and offered places to find out information about just what the temperature is.

James Balog offered evidence of that change in pictures of glaciers melting in the sea. Taking those pictures was what mattered to him.

Jim Green, NASA's Planetary Science Director, offered a first look at Comet Hartley from pictures shot just after a countdown appeared on a screen behind him.

And on and on it went, through Oliver Uberti, who urged the audience to stop pushing buttons, to Ben Rigby, who urged them to push those buttons to volunteer.

In the crowded entryway of the Ferguson Center, the guests represented backgrounds as diverse as the speakers.

The NASA Knights robotics team from Thomas Nelson Community College was accompanied by the robot the team built for the FIRST Robotics competition earlier this year. Students from Warwick High School in Newport News shot soccer balls into a basket atop the Knights’ robot.

An aspiring physical therapist, health care professional and pediatrician were three of about 20 students from Warwick who were chosen by their teachers to attend TEDxNASA.

"I enjoy seeing and hearing the different points of views about where we're headed," said senior Shauntrel McCovry. And with that notion, she had unknowingly discussed the 2010 theme: "What Matters Next?"

In another area of the lobby, Ethan O’Toole, a former robotics mentor and Langley employee, circled up with members of 757 labs, a club of Information Technology professionals.

Steven Sanders, a member of Langley's security office, experienced a new type of gaming experience known as “Mind Shift.” As his gaming character ran around and shot targets, his pulse was being measured. Given that his pulse was higher than the average baseline, his game was becoming increasingly more difficult. But Sanders appreciated the challenge and recognized the possible technological applications.

A few feet over, groups observed art from students, local talent and NASA employees. "It's not what you look at that matters, it's what you see," read a Henry Thoreau quote alongside the art.

At TEDxNASA it wasn't just what the guests heard, it was about the solutions that could emerge as result. It was about the next step. And it was a chance for guests to step into a future spotlight of their own.