"Today, we are taking a long look back, but we are also taking a look forward," said Center Director Lesa Roe to a standing-room-only Reid Conference Center crowd on Thursday at the Transonic Dynamics Tunnel (TDT) 50th anniversary celebration.

The "long look back" refers to five decades of memories and accomplishments at NASA Langley’s TDT.

And the "look forward" applies to how the facility and its employees will continue to contribute solutions for flutter and aeroelastic issues confronting fixed-wing aircraft, helicopters and tiltrotors, and launch and re-entry vehicles.

"It's the only wind tunnel in the world that has its capabilities. It could be used to flutter-clear aircraft, and that data is accepted without even having to go to flight test," said Woodrow Whitlow, whose career began in the TDT in 1979 and who is now mission support director for NASA. "And just the ability to assure the safety of the flying public and our military pilots … that makes it critical." 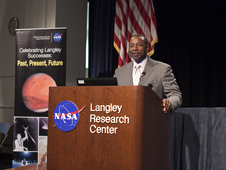 "Flutter became more complicated at transonic speeds," Whitlow said of a time preceding his own entrance to Langley. "In 1951, a new design criteria was set. Today, we would call those 'figures of merit.' "

In 1954, the 19-foot pressure tunnel underwent modifications and became operational as the Transonic Dynamics Tunnel in 1960.

Whitlow spoke of the first test in the TDT: the Lockheed Electra airplane. After three crashed, Lockheed turned to Langley for answers. "Those answers were found and the Electra flew safely for the rest of its service life," Whitlow said.

Bill Reed, who began his work in the TDT in 1960 and attended the ceremony, helped to research the Electra phenomenon. "We worked around the clock. We ran three-shift operations, and we spread out cots for the engineers to use. As a result of that, the problems were understood and from that point on the Electra was safe," Reed said. "Basically, the TDT allowed the Lockheed Company to survive."

For many in attendance, the TDT was remembered as a necessary component for safe flight.

"We like for our aircraft to be structurally stable," Whitlow said. "As the aircraft interacts with aerodynamic forces, it will react, but you want it to react in a way where any aeroelastic response is controlled and doesn’t get unstable, which could be catastrophic in loss of aircraft as well as loss of life."

The aircraft industry, NASA, the Department of Defense and academia have conducted studies at the TDT.

After the ceremony, guests were offered a first-hand look at the facility. In the lobby of the TDT, alumni worked to recall familiar faces as Mark Sanetrik explained the layout of the tunnel and then led them through the model preparation area, the heavy gas control room, the main control room and the test section.

The tour brought back memories for George Brooks, retired director for structures who worked in the TDT from 1965 until 1974. "During my research on helicopters, I tested the 1/10 scale dynamic model of the XH-17 helicopter in the return passage of the Full Scale Tunnel," Brooks said. "To my knowledge, this was the first complete dynamic model of an aircraft tested anywhere and was the forerunner of many component (wing, tail, etc.) dynamic models tested in the TDT." 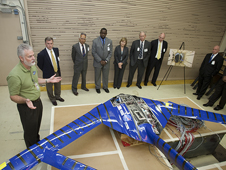 The first stop for elected officials, congressional staff and community leaders on a tour of the Transonic Dynamics Tunnel (TDT) was the model preparation area, where they viewed a scale model of a Boeing joined-wing configuration. Credit: NASA/Sean Smith
But, as Roe explained, "this isn't just a celebration of the facility, it's a celebration of the people."

Whitlow couldn't agree more as he reminisced about World War II pilots who flew models in the TDT, employees who bragged about never having a computer on their desks and even members of the Nuggets, the TDT softball team that, according to Whitlow, "included engineers that would spend three hours hashing a one-hour softball game."

And with these fond memories came an education. "It was just a wonderful bunch of people, and they were all smarter than I was and I learned so much from them," Reed said. "It was just great to see the creativity of the staff, and there was so much talent there. It was a big family, is what it was."

The extension of that family was present for the ceremony, allowing current TDT employees to mingle with alumni.

Damodar Ambur, director of the Ground Facilities and Testing Directorate, outlined the next two decades of the TDT, which will be driven by current- and next-generation aircraft and space vehicles.

Given the last five decades in the TDT, the expectation is that the success will repeat itself.