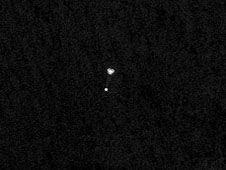 NASA's Phoenix Mars Lander can be seen parachuting down to Mars in this image captured by the High Resolution Imaging Science Experiment (HiRISE) camera on NASA's Mars Reconnaissance Orbiter. This was the first time that a spacecraft has imaged the final descent of another spacecraft onto a planetary body. Credit: NASA 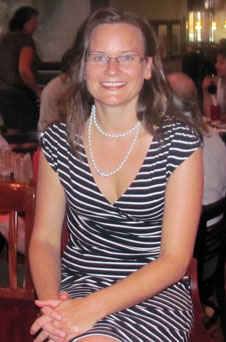 At the July Science Cafe, Jill Prince, the assistant branch head of the Atmospheric Flight and Entry Systems Branch at NASA Langley, discussed her "six minutes terror" during the entry of the Mars Phoenix Lander in 2008. Credit: NASA/Fenyang Stewart

For Jill Prince, and others who have attempted to land a vehicle on Mars, "six minutes of terror" is an all too familiar phrase. It is also an accurate summation of emotions from the time a spacecraft is at the top of the Mars atmosphere until it lands on the surface.

As Prince explained during July's Science Café at Marker 20 in Hampton, Mars Entry, Descent and Landing (EDL) takes about six minutes. During an EDL in May of 2008, Prince, Eric Queen and Prasun Desai from Langley's EDL team sat in the NASA Jet Propulsion Laboratory control room hoping that the controls they set and the risks they predicted years in advance were accurate enough to get the job done.

And with a 20-minute digital communication delay from Mars to Earth, about the speed of light, there was really nothing they could do but sit and hope it all went as planned.

Prince's own six minutes of terror resulted in NASA's Mars Phoenix successfully landing on the planet's polar regions. The touchdown was the first successful powered landing on the surface of the Red Planet since the Viking landings more than 30 years ago.

The Phoenix mission uncovered significant discoveries about never-before explored areas of the Red Planet. Scientists were able to verify the presence of water-ice in the Martian subsurface, find small concentrations of salts that could be nutrients for life and observe snow descending from the clouds.

To date, more than 60 percent of all international missions to Mars have failed, and one of the major challenges NASA faces isn't getting a spacecraft to Mars. The problem is landing it.

In preparation for the landing, more than 100 possible disturbances were simulated: density of the atmosphere, wind, radar disturbences and location of the center mass, to name a few.

"We disturbed everything that we could think of to disturb," Prince said in a dialogue with one of the Science Café's largest audiences to date -- more than 50 people. Of those, 15 were attending a Science Café for the first time.

They learned that data from previous Mars missions laid a foundation for landing Phoenix. Braking systems and parachutes are landing technologies from the 1960s and 1970s that are still being used.

Though the technology has been proven, there is always the unknown.

"If we knew the atmosphere better on Mars than we do on Earth, then there would be less error," Prince said, alluding to the difficulties surrounding EDL.

But as she explained, the only way to know is to try.

An animation depicted NASA's largest and most capable rover to land on the surface of Mars, the Mars Science Laboratory (MSL), which is scheduled to launch on Nov. 25, 2011. It will arrive at Mars in 2012.

The Science Directorate at NASA’s Langley Research Center, the Tidewater Chapter of Sigma Xi and the Hampton Roads Section of the American Chemical Society are partnering to host the "Science Café Series" in our community. Science Cafés are free and open to the public.

To learn more about the Science Cafe, please visit:
http://science.larc.nasa.gov/ScienceCafe/
"It looks like something out of a science fiction film," Prince said, introducing the animation.

A spacecraft will descend on a parachute and then, during the final seconds before landing, lower the upright rover on a tether to the surface, much like a sky crane.

Once on the surface, the rover will be able to roll over obstacles up to 75 centimeters (29 inches) high and travel up to 90 meters (295 feet) per hour. On average, the rover is expected to travel about 30 meters (98 feet) per hour, based on power levels, slippage, steepness of the terrain, visibility and other variables.

MSL is part of NASA's Mars Exploration Program, a long-term effort of robotic exploration. Mars Science Laboratory is a rover that will assess whether Mars ever was, or is still today, an environment able to support microbial life. In other words, its mission is to determine the planet's "habitability."

It will also demonstrate the ability to more precisely land a large, heavy rover with long-range mobility on the surface for future collections of diverse samples and studies.

Prince looks forward to watching the animation become reality as a part of the EDL analysis team at Langley. She is not a direct part of the engineering team for MSL, but she occasionally provides technical oversight on EDL review boards.

"We'll continue to push the envelope over the decades to come," she said.

The audience begged the question, "How do we get humans to Mars?"

According to Prince, it would take a vehicle about 40 times the size of the MSL. The '60s and '70s era technology is not capable of landing something that large. Engineers at Langley have been studying the best methods to land payloads of that size for both humans and large cargo.

It's possible though. And according to Prince, if anyone can make it happen, NASA can.

EDL can be a scary, but worthwhile investment.

"I spent five years of my life working on six minutes of Mars entry," Prince said. "It was worth every minute."