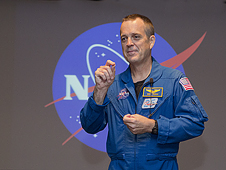 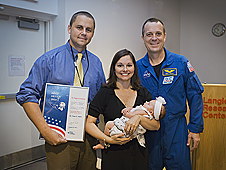 From inside the International Space Station (ISS), Ricky Arnold II, looked down at Earth and had some trouble processing the depth of his view.

His mind would quickly alternate from "How did get I here?" to "I need to get back to work."

At the Silver Snoopy Awards at NASA's Langley Research Center on Wednesday, he gave awardees and their guests some further insight.

When Arnold was 10, family friends introduced him to a photographer, John Holland, who worked at NASA's Johnson Space Center. Holland discovered that young Arnold had an interest in NASA.

"Like magic, every three to four months after a mission landed, or one was getting ready to start up, a packet would arrive from NASA addressed to me," Arnold said.

"The reason I share this story with you is, and I tell John this all the time when I see him, he felt like it was a really small deal, but it's a really big deal to a 10-year-old kid -- when someone who is involved with an agency like NASA, takes an interest in them," Arnold said.

When Arnold completed his astronaut training in 2006, Holland attended the ceremony.

As confounding as it was, looking down at the Earth, his crew's primary objective was to deliver and install the final pair of power-generating solar array wings and truss element to the International Space Station. The mission was successful, bringing the ISS to full power, allowing for a six-person crew.

He flew the 125th Shuttle flight, the 36th flight of Discovery, and the 28th Shuttle flight to the International Space Station. During this mission, Arnold accumulated 12 hours and 34 minutes of EVA (Extra Vehicular Activity) during two spacewalks. Discovery landed at NASA’s Kennedy Space Center in Florida, having traveled 202 orbits and 5.3 million miles in 12 days 19 hours and 29 minutes.

“You start to feel the forces of gravity start to build. It's really impressive," Arnold said as he shared video of his crew returning to Earth. "The sense of zero gravity is not as overwhelming as the sense of Earth’s gravity after 12 days in space.

Arnold also shared a sense of appreciation -- for those at Langley who made the shuttle, and other aspects of human spaceflight, successful. 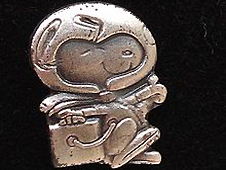 The Silver Snoopy award is a special honor awarded to NASA employees and contractors for outstanding achievements related to human flight safety or mission success. The award depicts Snoopy, a character from the Peanuts comic strip created by Charles Schulz.

The award is given personally by NASA astronauts as it represents the astronauts' own recognition of excellence. The Silver Snoopy award is one of several awards overseen by the Space Flight Awareness (SFA) program at NASA.

The award consists of a sterling silver "Silver Snoopy" lapel pin flown during a NASA mission, a commendation letter (stating the mission the Silver Snoopy pin was flown on) and a signed, framed Silver Snoopy certificate. Credit: NASA

Becky Bales - "This letter is to express my appreciation, on behalf of the astronauts, for your outstanding development, execution and leadership of Orion Launch Abort System project planning and control efforts, which resulted in the successful demonstration of the Launch Abort System during the Orion Pad Abort -1 flight test."

James Baughman – "On behalf of all the astronauts, this letter is to express our appreciation for your contributions toward the generation and characterization of cracked liquid hydrogen flow control valve specimens designed to mimic service cracking. These specimens allowed a probability-of-detection study to be conducted on flight hardware, and were used as flight rationale for the final 11 space shuttle missions."

Sandra Chellis – "This letter is to express our personal thanks for the fine support you have given to NASA's space programs. Specifically, for outstanding dedication and contributions to the STORRM Project, reducing risks for ORION Relative Navigation and docking with International Space Station."

John Davidson – "On behalf of all the astronauts, this letter is to express our appreciation for your contributions toward the development of the Orion Launch Abort System GN&C which significantly improves human space flight safety."

Michael Greenwood - "This letter expresses our congratulations and appreciation for your outstanding contributions as the LaRC SPLASH chief engineer for the Multi-Purpose Crew Vehicle (MPCV) Orion Project."

Lorrie Hardin - "This letter is to express my appreciation, on behalf of the astronauts, for your outstanding contributions as the Multi-Purpose Crew Vehicle (MPCV) Orion SPLASH program analyst."

Lisa Hawks - "This letter expresses our congratulations and appreciation for your outstanding contributions as the Multi-Purpose Crew Vehicle (MPCV) Orion SPLASH Operations and Integration Manager."

John Hopkins - "This letter is to express my appreciation, on behalf of the astronauts, for your significant contributions towards the safety of space shuttle flight and aerospace vehicles."

Larry Huebner - "This letter is to express my appreciation, on behalf of the astronauts, for your dedicated support to the Constellation Program, Ares Projects Office, and the Vehicle Integration Office in ensuring the successful analysis, documentation, and dissemination of critical flight test data from the Ares I-X Flight Test. These efforts wereinstrumental in improving the quality, safety, and performance of future launch vehicles and the successful execution of the U.S. Space Exploration Policy."

Roger Lepsch - "This letter is to express my appreciation, on behalf of the astronauts, for your outstanding and sustained contributions to the development of conceptual design tools and analysis of launch vehicle concepts and architectures that have advanced NASA’s spaceflight capabilities."

David McGowan - "On behalf of all the astronauts, this letter is to express our appreciation for your significant contributions toward the development of the Orion Launch Abort System that was successfully demonstrated during the Orion Pad Abort 1 flight test."

Frank Novak – "This letter is to express our personal thanks for the fine support you have given to NASA's space programs. In particular, for your exceptional technical and programmatic achievements as Project Manager for the Sensor Test for Orion Relative-navigation Risk Mitigation (STORRM) Development Test Objective (DTO) Project, which was successfully executed during STS-134 in May 2011. Additionally, for your leadership role in the development of the Langley-developed hardware and software deliverables which included: the reflective docking targets successfully installed on International Space Station (ISS) during STS-131, the flight avionics, and the flight software."

Chad Rice - "This letter is to express my appreciation, on behalf of the astronauts, for your significant contributions to the assembly, integration and testing of the hardware for the Sensor Test for Orion RelNav Risk Mitigation (STORRM) Detailed Test Objective (DTO) for the Orion Project that successfully flew on Space Shuttle Endeavour Flight STS-134."

Shann Rufer - "This letter expresses our congratulations and appreciation for your contributions to NASA’s space programs. You are commended for your dedication, professionalism, and significant contributions supporting many Agency space access programs highlighted by your sustained contributions to the Space Shuttle Orbiter Entry Aeroheating Subsystem team, for both mission preparedness and direct mission support with the Damage Assessment Team."

Richard Schwartz - "This letter is our way of saying thanks for the outstanding contributions you have provided toward the development and application of the Virtual Diagnostics Interface (ViDI) computer simulation tool and as a key member of the Hypersonic Thermodynamic Infrared Measurements (HYTHIRM) Project Team."

Dimitri Solga - "This letter is to express my appreciation, on behalf of the astronauts, for your exceptional Configuration Management/Documentation Management support, enabling the successful development of the Orion LaunchAbort System (LAS)."