The first patent for a flying car was issued in 1918. "It's something people have envisioned since the beginning of manned flight," said Herman Rediess, a former NASA employee of 25 years and a former Federal Aviation Administration (FAA) and Department of Defense (DOD) employee, now retired.

Almost a century after that patent, flying cars and roadable aircraft are still visions of the future.

"If I can have the capability to take off and land anywhere – one can imagine," Rediess said to a group of NASA Langley employees and Aeronautics Academy students in the Pearl Young Theater. 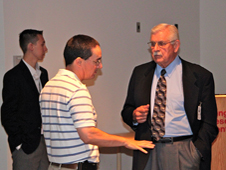 On a visit to NASA Langley, Herman Rediess met with Aeronautics Academy students and gave a presentation about unmanned air systems in the Pearl Young Theater. Credit: NASA/Denise Lineberry 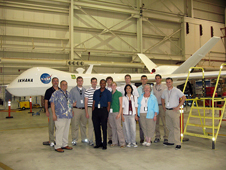 Despite what still seems distant, a main topic of interest for Rediess was unmanned aerial vehicles (UAV), which are a reality. Rediess sees a growth of UAV concepts over the next few decades through unmanned cargo systems, personal aircraft, global navigation systems supporting fully automated flight, metropolitan areas that serve as "super airports" and airport-independent roadable air vehicles.

He urged his audience to think at an innovative systems level and to evolve those concepts. "We need a new systems approach," he said. “Consider bold, new systems solutions.”

Reidess suggested that new systems should begin at airports and then expand to non-airport areas. And that automated Air Traffic Management systems for airports and ground transportation could first operate with an on-board pilot as a back up. Autonomous civil aviation could also make its way along an evolutionary path, one step at a time.

"There are big commercial advantages with long-term pay-offs," he said.

According to Rediess, steep climb outs and approaches at idle power can reduce noise by 25 times. A similar takeoff and landing process has been used at NASA’s Dryden Flight Research Center since the 1950s. An electromagnetic rail catapult and decelerator system could reduce airplane approach noise by 95 percent.

For tripled airport capacity, he proposed automated formation takeoff and landing and a "technically feasible" airport-independent UAV cargo system. Meanwhile, transition points for travelers could be minimized with a global navigation system.

It was no accident that Rediess arranged these ideas at NASA or for this audience. His message began early in the day when he met with Langley's Aeronautics Academy students to discuss their summer project, which combines elements of the Environmentally Responsible Aviation Project with the Unmanned Aerial Systems Program. Both of those projects fall under the Integrated Systems Research Program of the Aeronautics Research Mission Directorate at NASA headquarters.

"The Academy aims to give students an integrated systems research experience as they work on a team that resembles the inter-organization, multi-disciplinary teams they will join when they become part of the workforce," said Liz Ward, who leads Langley's Aeronautics Academy.

Through a dedicated aeronautics lecture series and a "lunches with leaders" program, the students will meet leaders and experts in the field of aeronautics.

Last week in California, the students toured Dryden's labs and aircraft and visited Scaled Composites, where they toured SpaceShipTwo (SS2), a suborbital, air-launched spaceplane for carrying space tourists, with the project’s chief engineer.

On Thursday, they toured and met with leaders at Boeing Phantom Works, a research and development unit that designed an unmanned combat air vehicle. There, the students witnessed a composite structure that will be flown to Langley and tested in the Combined Loads Test System (COLTS) facility later this summer.

"Travel is necessary so the students can gain a broader perspective of the nation's aeronautics enterprise," Ward said.

Throughout the summer, they are continuously being exposed to new possibilities, whether seen or heard. And just as Rediess urged, they may have some "bold, new systems solutions" of their own.

And just maybe -- cars will be flying sooner than later.