Before 1940, African-Americans were denied military leadership roles and skilled training because many whites believed they lacked qualifications for combat duty. They were barred from flying for the U.S. military. 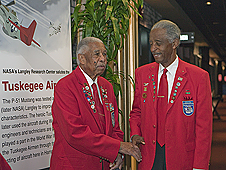 Grant Williams and Ezra Hill, two of the original Tuskegee Airmen, were at Cinebistro in Hampton for a special showing of "Red Tails." The event, which was organized in part by NASA Langley, invited students from Hampton University to view the movie and talk with the airmen. Credit: NASA/Sean Smith.

Click to enlarge
In 1941, an all-black World War II fighter pilot squad was formed and the Tuskegee Airmen, as they came to be known, were sent to North Africa and Italy, from their base in Tuskegee, Ala., for the so-called "Tuskegee Experiment." They escorted white bomber pilots who were often under attack.

Decades later, more than 19,000 Tuskegee Airmen have had the chance to share their stories. Two, Ezra Hill and Grant Williams, were at Cinebistro in Hampton to share their stories with a theatre full of Hampton University students and employees from NASA’s Langley Research Center who helped to coordinate an event surrounding the premiere of "Red Tails."

When the pilots of the 332nd Fighter Group painted the tails of their P-47s red, the nickname "Red Tails" was coined. A month later, the airmen flew the P-51 Mustang, which was tested in Langley's 12-foot Tunnel. Most of the WWII airplanes were tested in NASA Langley's wind tunnels.

When the Tuskegee Airmen were fighting for their country, segregation was the law. As members of the military, they had to fight harder to prove their talents and to become respected. 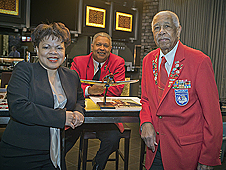 Click to enlarge
A poster titled, "Unsung Heroes" was on display in the Cinebistro alongside tables of books filled with articles, photos and information about the Tidewater Chapter of the Tuskegee Airmen Inc. On the poster was a quote: "The ultimate judge of a person’s character is their ability to exceed expectations when little recognition or praise is given."

"Back then, nobody realized the significance of what we were doing," said Williams. "Now, they seem to think we could walk on water."

In spite of adversity and limited opportunities, the airmen shot down more than 400 enemy aircraft.

"The records established by those pilots have never been exceeded," said Williams, who worked as a clerk. "And I don't think it ever will be."

When the airmen were sent to Italy, the U.S. was losing an average of 25 bombers each day. Each bomber held 10 men.

"If they had lost more of those bombers, there would be less of us," said Terance "T.J." Spann, President of the Tidewater Chapter of the Tuskegee Airmen Inc. "I hope you take away an appreciation of what they accomplished and how many lives they actually saved."

After the movie, Hill and Williams answered questions from the audience. Hill explained that he worked for Col. Benjamin O. Davis, who was played by Terrance Williams in the movie, for three years.


Meet Some of the Tuskegee Airmen:

Hill joined the military before completing high school. Because his test scores were high, he was asked to join the Tuskegee Airmen. Col. Davis urged Hill to return to school. He did and he went on to earn degrees in engineering and computer science.

"I was given my orders after basic training and was told I was going to an all-black squadron. I didn't know what to think," Hill said. "When I got there [Italy], it was like going to Heaven."

Hill and Williams confirmed the fellowship shown in the movie among the airmen.

Williams spoke about how welcoming the Italians were to them. He lived in a house with two Italian families, who often invited him for meals. And he became good friends with a tackle shop owner in Italy, who he remains in contact with.

They mentioned 18 nurses who were also part of the squadron. They were not depicted in the movie and, according to Hill and Williams, their story isn’t shared enough. "They were the Tuskegee Airwomen, but you rarely hear about them," Hill said.

"We'll continue to go out and share our stories until it's in American history books," Spann said.

Despite their sacrifices, when the airmen returned home, they weren’t greeted by applause. As Hill explained, signs directed them where to go since segregation was still alive and well.

Still, it was their country. They fought and fought well. Though it took time, they're glad they didn't remain unsung.

"It's a different world now," Williams said. "This story has impacted our nation."