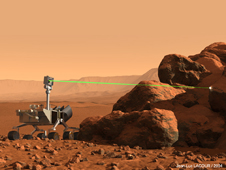 Imagine the Curiosity rover as it lands on Mars and begins to explore the Gale Crater. From the mast of the rover, the ChemCam instrument shoots a laser beam at a rock, burning into it while the instrument examines the smoke, allowing scientists here on Earth to determine its composition.

What controls the laser beam? And how does the data from the smoke make it back to scientists on Earth?

The answer to those questions lie within Radiation Tolerant Intelligent Memory Stack (RTIMS), which was originally developed by two researchers from NASA's Langley Research Center.

Unsure of where the tiny device was headed, Jeff Herath and Tak-Kwong Ng had big hopes for where it would end up as they developed their technology to support the nearly exponentially increasing resolution of space based instruments. But they never imagined that it would hitch a ride to Mars on the Curiosity rover.

The requirement to efficiently handle large data sets on board spacecraft necessitates the development of larger, faster memories capable of operating in the harsh environment of space. In designing a larger memory for use in space, several unprotected electronic components are brought together to form a system that is protected, or radiation-tolerant. This was the philosophy behind the design and development of the Radiation Tolerant Intelligent Memory Stack -- or RTIMS.
Credit: NASA

"It was unexpected, but it’s the opportunity of a lifetime," Ng said. "There is a very small group of people who can say they built technology that is going to Mars."

On Curiosity, RTIMS is located at the rover's highest point, inside of the ChemCam Instrument on the Remote Sensing Mast (RSM). After Curiosity's expected arrival to Mar’s Gale Crater on Aug. 6, RTIMS will send important research data back to Earth, while controlling the laser beam on the ChemCam, an instrument that will study the compostition of rocks and soils, and help scientists determine if chemicals necessary to support life were, or even are present on Mars.

RTIMS’ highly reconfigurable architecture, developed by NASA Langley, allowed the ChemCam team to create the custom functions needed to bring their instrument to life. NASA Langley also provided the Intellectual Property core from the RTIMS technology to mitigate single event upsets, the change of state of a memory element caused by ions or radiation striking the device.

The RTIMS device was a perfect candidate for Mars because of its radiation tolerance, real-time data processing, reconfigurable computing, environmental ruggedness, and large memory array. 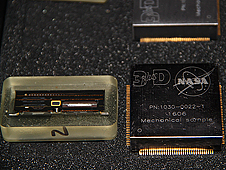 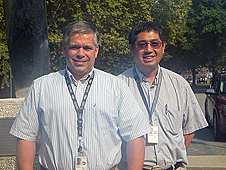 When Jeff Herath (left) and Tak-Kwong Ng developed RTIMS almost a decade ago, they never imagined that it would end up on the Curiosity rover. Credit: NASA/Denise Lineberry

The costs and risks associated with it are small, as well as the size. It fits into the palm of a hand.

A new stacking technology, developed by 3D Plus, allowed different types of electronic parts to be built into a single RTIMS component. This new technique provides an 80 percent reduction in required volume or footprint for a given application. The stack weighs 60 grams, or a little more than 2 ounces.

Using the radiation mitigation techniques it will need on Mars, RTIMS has a memory array of 1 gigabit with triplication– that’s up to one billion bits of data. In a less challenging radiation environment, it provides 2 gigabits of error corrected digital memory.

"That's the 'Intelligent' in RTIMS," said Herath. "It is flexible enough to compute and to control elements. And its functionality can be adjusted for the intended operational environment."

In the past, RTIMS has also been licensed and used for communication satellites.

"Back in 2003, RTIMS was the largest individual award from Advanced Information Systems Technology (AIST)," Herath said. "I want to thank them for that funding. It's been worth the investment and I'm grateful that they took a chance on it, and our team."

Since Herath and Ng have both also been involved with MEDLI (Mars Science Laboratory Entry Descent and Landing Instrumentation), they have found themselves greatly invested in this mission, along with about a hundred other researchers and technicians at NASA Langley.

Once MEDLI on MSL collects real-time data of atmospheric entry and then breaks away, Curiosity lands. And RTIMS goes to work.

"It's still hard to believe, but that's why we create these space-based technologies," Herath said. "To give ourselves, and the next generation of engineers, the tools and the data to deliver on NASA’s missions and to hopefully go beyond what we can imagine today."

To learn more about the Mars Science Laboratory mission, visit the mission home page at:
http://www.nasa.gov/msl