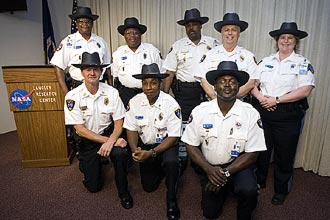 Security specialist Kim Sheffler explained, "Completion of this training gives officers federal arrest authority, which gives them the ability to arrest on the property."

Kevin Barnes received an award for "Distinguished Graduate," which is given to the student who performs the best throughout training.

John Leo, of CSC (Computer Sciences Corp) Applied Technologies Division, and head of the security contract, spoke during graduation and explained, "We are the very first graduating class from this training that had all members pass the law exam on the first attempt."

Monica Green, head of security, thanked the graduates for their service and led them through "The Oath of Office." Before passing out diplomas she added, "You represent professional excellence to those that we serve and protect." 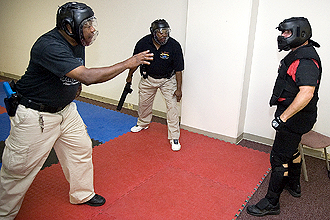 Image Left: Officers training in defensive tactics are faced with situations where a person is resisting arrest. Credit: Sean Smith

The training is mandatory for all security officials, but this group attended the training at Langley. The remainder of Langley's force will attend the same training at Goddard Space Flight Center or Wallops Flight Facility.

The instructors are from Kennedy Space Center and all have a military, police or SWAT background. Lead Training Instructor, Bobby Drinkwater said, "I've always enjoyed training. We train all over the United States at every NASA center."

Although the trainees are taught the technique of physical force, they are also taught the importance of justifying their choice of action. The trainees were placed into "use of force" scenarios, which were followed up by a written report. The following day, the trainees attended a mock courtroom hearing where they gave testimony to justify their actions.

The graduates had to pass two written exams and a physical exam to be sworn in by NFLET. After completion of the training, security officials must attend a refresher course every two years.