Grow Text SizeShrink Text Size
Going Where No NASA Show Has Gone Before
By: Denise Lineberry

Almost three years and 49 podcasts ago, Chris Giersch and Blair Allen had an idea for an unscripted and unpredictable approach to teaching the public about "everything NASA." When they presented a pilot to the Exploration Systems Mission Directorate (ESMD) at NASA headquarters, they were asking for a leap of faith.

That initial funding enabled the NASA EDGE crew to make leaps and bounds of its own.

Apart from taking an "outside-the-box" approach to podcasting, NASA EDGE introduced the first agency-moderated, interactive blog to the public.

"We want to keep pushing the envelope and not make these podcasts as typical as a broadcast," said Giersch, who hosts the show along with Allen. 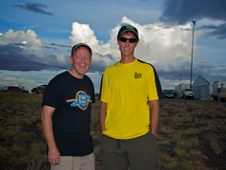 Whether the crew is driving a Lunar Electric Rover, or scientists are making an impromptu topic switch on camera from lunar architecture to clothing, or skiers are in the background doing 360s at the Winter X Games … anything but typical comes to mind.

Among 321,000 nominations for more than 3,500 different shows, the NASA EDGE crew of six found themselves in the top 10 in the running for “Best Video Podcast” in the Fifth Annual Podcast Awards. Both believe the increase in downloads was a direct result of their visibility from this nomination.

Now approaching their fourth year and 50th podcast, the hosts have some new ideas to go along with the added attention.

"When the show began, we didn’t know what to expect," Giersch said. "We just knew we were excited for every download." With 6,690,402 downloads behind them, Giersch and Allen are hopeful for what the show has ahead.

Other possibilities are shows on NASA's Extreme Environment Mission Operations (NEEMO), Applied Earth Science Applications, the Lunabotics Mining Competition at Kennedy Space Center and Robonaut 2. There is no shortage of ideas or video. 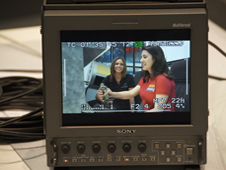 "We like to keep our show open and flexible," said Allen. "It’s part of what makes it so different."

They have some unused video that they may bring back this year. One example is their interview with the "bird watcher in a tower" at a shuttle launch. "That’s his job," said Allen. "It sounds odd, but it is a job that someone has to do."

Soon, they will release a Lunar Electric Rover (LER) application for the iPhone, which allows users to get up close and personal with outposts on the Moon. NASA EDGE, the Exploration Technology Development Program (ETDP) and Analytical Mechanics Associates (AMA) Studios collaborated on the application, which is being reviewed by Apple.

"The application will allow the user to drive the LER around the lunar surface and visit the different elements," said Sanjay Gowda of AMA, director of the concept. "Most of all, it's fun. It is a multifaceted application that combines education, outreach and engineering."

NASA EDGE looks forward to announcing the availability of the application.

Giersch and Allen have credited much of their success to others.

"We have a close relationship with players across the board, and that helps when we go out into the space community," Allen said.

That also goes for their ever-growing population of fans.

Giersch and Allen often overhear viewers who recognize them as "the NASA EDGE guys." A group of students drove four hours to meet them at an Arizona college. They’ve even met for dinner with a few of their "Facebook fans."

After all, these are the folks downloading the shows and following each leap and bound made. And the crew hopes that everyone will stay tuned to NASA EDGE . They have a few "secrets" in store for this year.

Only time will tell. And the past three years have told that it's only going to get better.


For more information about NASA EDGE or to view their podcasts, please visit: