He prefers the latter perspective, especially when speaking to a group of researchers, like those who filled the Reid Conference Center during the May Colloquium at NASA's Langley Research Center for his presentation, "The Past as Prologue: Learning from the Climate Changes in Past Centuries." 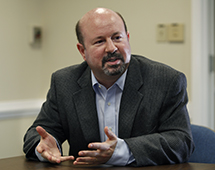 Mann was a lead author on the Observed Climate Variability and Change chapter of the Intergovernmental Panel on Climate Change (IPCC) Third Scientific Assessment Report, which earned him a Nobel Peace Prize in 2007. As Mann explained, that report landed him in the spotlight when the "hockey stick," which showed reconstructions of the temperature record from the past century, became a central icon for opposing sides of scientific data and fossil fuel interests.

"If there's an interesting footnote it's that, while I'm largely known for my experiences at the center of the climate change debate because of this 'hockey stick' curve that we published," Mann said, "scientifically, that result was sort of one of the least interesting aspects of the research that we originally did."

Just as his role as a public figure was accidental, so was the curve that was coined as the 'hockey stick.'

"We weren't setting out to produce a curve; we were actually setting out to piece together the larger puzzle of how the climate had varied over past centuries because we only have about a century of widespread, instrumental data," Mann said. "Here at NASA, they can tell you that we only have a couple decades of remotely sensed data."

Mann and his colleagues studied about a century or so of widespread thermometer measurements from around the globe to get a sense of how the climate varied. For their research, they turned to proxy records, or indirect records, like tree rings, ice cores and corals. They used that indirect data to reconstruct patterns of climate change. By looking at the nature and history of the past, of things like El Nino, and solar output from large tropical eruptions, they can estimate what took place centuries ago.

As Mann explained, the "hockey stick" essentially reduced decades of data to a single number.

He considers that controversy "one battle in a larger war" to discredit science, and consequently the scientists behind the data.

In the prologue of his book, "The Hockey Stick and the Climate Wars: Dispatches From the Front Line," Mann talks about the "Serengeti Strategy," when individual scientists are "focused on and separated away from the herd, so that they can be made examples of."

Mann argued that those tactics are part of a larger agenda to divide the public and to continue reliance on fossil fuels.

Mann lives in Pennsylvania, where oil was first extracted in the U.S., and where the economy was built on coal and now natural gas figures prominently. With a global infrastructure that's based on fossil fuels, and invested interests, Mann says he understands the resistance to change.

"It's fair to say that we have profited from that legacy [fossil fuel], and now we're learning that there's a downside to fossil fuel addiction," he said. "Over the past several decades we've understood increasingly well, an increasing concentration of greenhouse gases and climate change, and we are starting to see adverse effects."

Mann argued that thousands of scientists around the world, including the National Academy of Sciences and all the major national academies of major nations have not all come together to create a hoax. He argued that they've only published the data.

"There's a good faith debate to be had about how to move smoothly from fossil fuels to non-carbon based energy in a way where we don’t hurt the economy and find jobs for people who were previously in that industry," Mann said. "There's a worthy debate to be had about how to deal with it, but the problem is — there hasn't been a worthy debate about whether or not the problem exists."

His data concludes that a combination of warm tropical climate in the Atlantic and La Nina-like conditions in the tropical Pacific could explain periods of relatively high past Atlantic hurricane activity. Also, the reconstructed La Nina-like patterns during medieval times and El Nino-like anomalies during the Little Ice Age suggest a "thermostat-like" response to natural radiative forcing.

"The recent hemispheric-scale warmth anomalous, in at least a millennial context, can only be explained by anthropogenic [human-caused] radiative forcing," Mann said.

As Mann flipped through dozens of graphs during his Colloquium presentation, he made it apparent that not one single graph, not even a "hockey stick," could explain it all. But when strung together, the data could speak volumes.

"The whole is greater than the sum of the parts," Mann said, adding that proxy reconstructions should be taken into account in model and data comparisons.

Until a "good faith debate" happens, Mann can continue to provide his footnotes.