More than 30 participants arrived this morning for NASA Langley's Mars Science Laboratory Social Media event. Soon, they were standing at attention, facing an Orion mock-up capsule with their phones, tablets and cameras held up to capture the moment.

Within seconds, they shared images, thoughts, videos and quotes about NASA's next exploration vehicle, on various social networks, such as Twitter, Facebook and Google+.

In the past, these events were called 'Tweet-ups,' but that title was changed to 'NASA Social' to accommodate various mediums for networking.

Throughout the day, they visited the Reid Conference Center, the Langley cafeteria, the Transonic Dynamics Tunnel, the Science Research Complex and the Mach 10, 31-Inch Tunnel. As they soaked in information about Orion, Curiosity Entry Descent and Landing (EDL), MSL EDL Instrumentation, game-changing space technology, the Dream Chaser, SAGE-III and IRVE-3, they sent it back out from their gadget of choice.

"Langley is a lot of things to the Agency. We've done a lot of firsts," said Dave Bowles, Langley's associate director. "We're a big part of MSL. And we've landed things on Mars before." 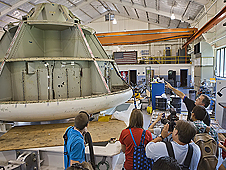 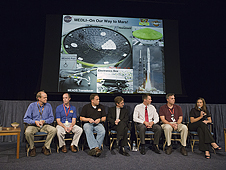 Though the itinerary for each center was different, they all took a break from tours to connect to a multi-center NASA Television simulcast with the Jet Propulsion Laboratory (JPL) during its NASA Social. JPL is the lead NASA center for MSL’s two-year mission.

"People around the world need to know about Curiosity," said NASA Administrator Charlie Bolden. “And we need you to share this news with your friends and followers on social media.”

This allowed participants a unique glimpse into a widespread collaborative effort, which resulted in MSL, and will possibly result in the Curiosity rover landing at the Gale Crater on Aug. 6.

“I hope you walk away from this experience knowing more about your space program, and how it works to expand our knowledge and capabilities, explore new frontiers, and inspire the next generation,” Bolden said.

Bo Lowrey, who has always been interested in astronomy, biology and mechanics, prefers to use social networks as a means to get information. He shared his photos and messages through text messaging.

The participant’s interests in all-things-NASA are deeply rooted.

William Ung traveled nine hours from California to Langley for the event, because he wanted behind-the-scenes access to NASA’s first field center. He is an aerospace engineer at Northrop Grumman who grew up in Florida and used to hear the ‘sonic boom’ of the space shuttles between classes.

Angela Gibson used to watch space and science fiction films with her grandfather, which is something she now does with her son, Aidan, who is 7. Aidan has attended three NASA social events with her. They both watched NASA's Mars Science Laboratory and Curiosity lift-off from Space Launch Complex 41 on Cape Canaveral Air Force Station in Florida on November 26, 2011.

"He thinks it's his rover," Gibson said.

"Where else would you get to meet people who all have an interest in space?" said Jennifer Andrews, a teacher in Henrico County. "I never thought of myself as a 'space geek,' but some of my friends have always followed it, and my dad was in the Navy and had classmates that were in the Space Program."

Even when the social ends, the sharing continues.

"One of the things that I do [as a teacher] is I interpret what I learn and teach it to my students," Andrews said. "I'm there to remind my students that there is still this world outside of the Earth, and NASA is a very important part of trying to learn about it."

Find this article at: http://www.nasa.gov/centers/langley/news/researchernews/rn_LangleySocial.html