During a Mars Science Laboratory (MSL) news conference at NASA's Langley Research Center, Jody Davis compared her role in the mission to an Olympic athlete who has trained for years. 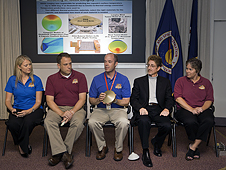 "You get one shot to get the gold medal," said Davis, a flight mechanics engineer who assembles and runs simulations of the Entry, Descent and Landing (EDL) for MSL.

For Davis and about 100 other researchers and technicians who worked on MSL at NASA Langley, their shot at the "gold medal" begins shortly after 1 a.m. EST on Aug. 6, as the 7,000-pound, car-sized spacecraft decelerates from 13,000 miles per hour to less than 2 miles per hour, as the wheels of the rover attempt to safely land on a precise spot on the surface of Mars.

To do that, the onboard computer will autonomously execute a complex sequence of events, first using atmospheric drag, then a parachute, and finally rocket engines to slow down.

NASA's Langley Research Center plays two critical roles in the MSL. One is EDL, the so-called “seven minutes of terror” when the spacecraft enters the Mars atmosphere and descends, and parachute modeling and simulation to support EDL. The other is the MSL EDL Instrumentation (MEDLI), which will record heat and atmospheric pressure during entry and descent.

During the conference, each of the five speakers represented a different piece of the puzzle.

As real simulation data appeared on a screen in the newsroom, Davis explained that NASA Langley leads the mission's EDL research and computer simulation effort. The team has practiced millions of computer landing simulations on Mars, trying to include all the variables that could affect spacecraft landing, including heat, wind, density of the atmosphere and dust storms.

While holding a four-percent scale model of a heat shield, Karl Edquist, lead for Langley's aerothermodynamics team, explained how he and his team determined how thick the materials inside the shield needed to be in order to slow and protect it from heating above 4,000 degrees Fahrenheit.

NASA engineers Michelle Munk and David Way explain the MEDLI -- Mars Science Laboratory (MSL) Entry, Descent and Landing Instrumentation -- package on the MSL aeroshell that will measure the heating and pressure the Curiosity rover experiences as it flies through the atmosphere of Mars to its landing site. Credit: NASA/Gary Banziger

Predicted heating levels are about three times higher than those of the space shuttle when it entered Earth’s atmosphere. Peak heating occurs about 80 seconds after atmospheric entry, when the temperature of the external surface of the heat shield will be about 3,800 degrees Fahrenheit.

Mark Schoenenberger, lead for Langley's capsule aerodynamics team, explained how they used aerodynamics data from computational predictions and wind tunnel validations to get to a precise spot, in this case, the Gale Crater. His data allows Davis to simulate maneuvers and check for hazards.

Juan Cruz, an aerospace engineer, supervised the creation of parachute mathematical problems for the largest parachute ever to be flown to Mars. "If you put the capsule at the 50-yard line of a football field, the top of the parachute would end up in the end zone," he said.

More than 90 percent of the deceleration before landing results from friction with the Mars atmosphere before the parachute opens.

Michelle Munk, deputy project manager for MEDLI, said the instrumentation, turned on in March, is the first of its kind that NASA has used to collect accurate, real-time, high-fidelity data of atmospheric entry at another planet.

Engineers will use this information to see how well computer models predicted the spacecraft’s path and aerodynamics, as well as to determine the atmospheric density and winds it encountered.

Data from MEDLI will also be useful for spacecraft designers – especially when it comes to developing future Mars entry systems that are safer, more reliable and lighter weight.

"We are fortunate enough to leave behind the initial steps of exploring the rest of the solar system," Cruz said. "This is what differentiates us [humans] from all other living creatures. Every day, humanity leaves knowledge behind. And one day, even MSL will become primitive and will be considered a part of the stone-age."

For important lessons learned, Langley's MSL team looked to past Mars missions. MSL uses data configurations from Viking. A fraction of Pathfinder's capabilities used to calculate projections were incorporated. Past orbiter missions provided important data for aerobraking, which requires less fuel and helps to slow down the spacecraft.

Since the system cannot be tested, end-to-end, in any facility on Earth, the real test will be on Aug. 6.

"Mars is a tough opponent," said Steve Jurczyk, Langley’s deputy director. "But Langley has been involved in every successful NASA Mars mission."

If MSL beats all odds for a successful landing, Davis will be inside the "war room" at NASA's Jet Propulsion Laboratory in Pasadena, Calif., to announce that success to the country, and to the rest of the world.

Team members are ready and anxious to let the games begin.