Going Where No NASA GIS Team Has Gone Before
By: Denise Lineberry

Growth or reduction in employee population, relocations, changes in buildings and utility systems, old buildings coming down and new ones going up, flooding, snow-covered pavement – all require planning at NASA's Langley Research Center.

That’s why team members have traveled to Langley’s lowest depth, 21.13 feet-deep in "Tunnel 4," which houses steam lines, water pipes, electrical conduits and other utilities serving the center's buildings. And they've measured Langley's highest height, the top of the Gantry, which stretches 249.5 feet toward the sky.

The data they survey and compile support roughly 3,800 employees working in more than 290 buildings, 2.25 miles of tunnel, 14.5 miles of paved roadway and structures that spread across NASA Langley’s 762 acres. 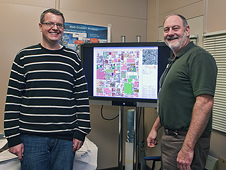 Credit: NASA/Sean Smith
In general, GIS allows us to view, understand, question, interpret and visualize data in ways that reveal relationships, patterns and trends in the form of maps, building layouts, reports and charts.

Brad Ball, the leader for the Center Operations Directorate (COD) GIS Team is determined to keep Langley at the forefront of GIS. In 2009, the Langley team received a Special Achievement in GIS award from ESRI, the leading software company in the field, in recognition of its innovation and leadership in GIS and spatial data. The GIS team's more recent accomplishments were featured in Government Technology magazine and Professional Surveyor magazine in 2010, with the Gantry making the cover of Professional Surveyor.

"Every day, we turn the wheel," Ball said. "We have forged partnerships with several critical operations such as SQAA, ROME and Safety to ensure accuracy and currency of our data."

A space-planning tool created by the team, which contributed heavily to the ESRI Special Achievement Award, includes every building, person and room on center. Points represent employees, and the varied colors represent organizations. Other diagram details reveal the proximity of locations to the outside gates, electrical components, high ceilings, conference room capabilities and whether the space is technical, administrative or a laboratory.

These digital representations are being used to give real-time solutions for relocation efforts associated with New Town.

With every facility modification on the center, Langley’s GIS Real Property and Building Space Utilization data care updated by Alan Rawls and become available for viewing at the GIS Map Gallery (http://gis-www.larc.nasa.gov/maps).

LITES employees Robert Gage and Ray Gates developed the GIS computer software used to provide solutions for optimizing the allocation of office space at Langley and Johnson Space Center. This software allows space utilization personnel to provide objective solutions for relocation or addition of personnel. Whether short or long-term, the keyword again is accurate.

Tunnel diagrams are accurate within two inches and aerial photos that result in a digital map of the center are presented using a two-inch resolution. "No other [NASA] center has that type of accuracy and validation," Ball said. "We work under the idea that if you do things really well, and create sustainable data, it can be used by anyone." 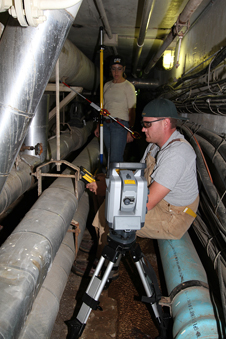 Dana Torres and Jason Hall do a Utility Tunnel Survey beneath the surface of NASA's Langley Research Center.

Credit: NASA/James Baldwin.
Shane Wolf, a GIS team member, zooms into a clearly visible concrete slab in a high-resolution aerial photo and compares it with an earlier vintage using the Aerial Comparison Tool he developed. There was an obvious improvement in clarity and detail. Langley’s online maps were last updated using aerial photography in 2008. Funding will determine the next update.

In the area of safety, the Emergency Operations Center (EOC) Team used data compiled by team members in December. Langley’s Safety Manager Jose Caraballo coordinated snow removal efforts with ROME based on information that the GIS team turned around within a day.

The team was able to provide plow drivers with printed maps of the center before the predicted foot of snow a few days later. Because of the high-resolution map, the drivers can see exactly where they need to dodge concrete bumpers and other obstacles the snow is hiding, saving the center thousands of dollars in possible damage.

Additionally, the GIS team is supporting the center's latest Fire Alarm System upgrade with GIS facility background graphics. Also, the existing Building Egress Maps are being reproduced in the ArcGIS database for redistribution to the center.

"We take on partnerships that have common goals with LaRC and deliver something that's real," Ball said and explained that this allows more to be accomplished for Langley.

With a few clicks of the mouse, Shane Wolf calls up the web-based Flood Impact Analysis Tool that displays the impact of the nine feet of water that accompanied Hurricane Isabel. For Building 1275, this meant that water would reach one foot inside the building. The tool allows for flood preparedness on center and beyond. Langley Air Force Base and Johnson Space Center have used the Langley-developed flood tool for their own property.

Langley engineers installing a new crane atop the Gantry called upon the GIS team surveyors to measure the displacement of the Gantry as loads were applied to the crane. Additionally, they were asked to scan Langley’s 14 x 22 Wind Tunnel to plan for installation of new apparatus in the test section.

They even venture into rough territory when duty calls.

Apart from providing an accurate analysis for repairs, "they found parts of this massive tunnel system that were four feet off compared to earlier surveys," Ball explained.

Another GIS team member, Ryan Kozoriz, manages the GIS utility system data for Langley and JSC and has been heavily involved in the geographic correction of those utilities. He has developed advanced network analysis capabilities that models functioning utility systems. Using the networking capability, Kozoriz is able to simulate flow in the sanitation, storm and water systems, as well as model underground water breakages at the center.

"When you can deliver accurate measurements in the millimeter range, you can find numerous ways to help," Ball said.

Langley's GIS team has members that cover all angles, from an IT specialist who keeps the information available, even when the computer server goes down, to a member who is developing an equipment location tracking capability.

The GIS team is investigating options to keep imagery updated an the ever-changing NASA Langley. One such approach that came from a ROME contact is the use of a remote control helicopter for more frequent low-cost updates to small areas using aerial high-resolution photography.

With Langley being the oldest NASA center, the team is focused on making the GIS data as contemporary, and as accurate, as possible. The members of the LaRC GIS Team have proved they are willing to go the extra mile, or miles, when needed.


View some of the online services and information made available by Langley's GIS team at:
http://gis-www.larc.nasa.gov/