A six-week design and build challenge that had high school students across the world busy every day after school and on weekends is wrapping up.


FIRST Robotics teams participating in the 2011 LOGO Motion competition had to complete work on their robot and ship it by Feb. 22 in order to compete in regional tournaments.

LOGO Motion involves building a robot and mini-bot that can move and climb as well as position inflatable tubes and symbols on pegs, making up the FIRST logo. At the end of the game, the main robot must deploy a mini-bot that will climb to the top of a nine-foot pole in under 10 seconds.

The NASA Knights of New Horizons Regional Education Center in Hampton, Va., were still putting last minute touches on its robot last week, just four days before the deadline. The team will compete in two regional tournaments, one in Duluth, Ga., in March and in another in Richmond in April. The national competition will be held in St. Louis, Mo., April 27-30. 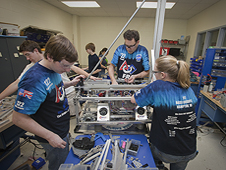 During an Open House on Feb. 17, NASA Knights team members put the final touches on their robot for this year's LOGO Motion competition. After a six-week build period, the team shipped their robot to Georgia Feb. 22.

Credit: NASA/Sean Smith.
Team members had to rework the robot's mechanical arm because the elevator mechanism they built to deploy a mini-bot was too heavy, explained Joanne Talmage, a robotics, electronics and fiber optics instructor at New Horizons who leads the team.

Though there have been technical challenges along the way, Talmage said the students have had a lot of fun learning and building with their fellow teammates.

"It's about having fun," she said. "Parents bring in food and we have mini-competitions and the mentors really like participating as well."

Parents, friends and students could see the team's progress at an open house held on Feb. 17. During the demo, student operators drove the robot around in circles and from side to side. Student Becky Thompson demonstrated the mini-bot's ability to climb a pole. Fabricators stayed busy working on the mechanical arm and the animators showed off their computer skills.

Though the students spend a significant amount of their free time building and programming their robot, they also stay busy being good engineering stewards, attending different demonstrations and spreading the word about FIRST.

Earlier this month some team members attended Aerospace Day in Richmond and they also make regular appearances at the Virginia Air and Space Center for different functions such as Yuri's Night.

"We've already done 10 demos," Talmage said. "So far, June was the only month that we didn't have anything scheduled."

The team has a good reason to keep up its momentum. Since the NASA Knights team formed 14 years ago, they have made it to the national competition every year.

Because of their experience, the NASA Knights are often asked to mentor newer "rookie" teams, who are still learning how to utilize their resources.

A new robotics team in Portsmouth was low on materials and mentors, so Talmage and a few team members brought them extra materials and extra sets of hands.

"They weren't going to be able to build their mini-bot, so we went over there and worked with them and got it all completed in one day," she said.

The Knights are looking forward to the upcoming competition season and are hoping for the best.

"I think it will be fun just being there," said NASA Knights team member Marcus Starman. "There will be a lot of emotions and a lot of excitement."