They came to celebrate the last 25 years of the Langley Aerospace Research Summer Scholars program, but also to talk of the agency's next 25 years.

"LARSS is continuing to provide our agency with problem-solvers and innovators," Lesa Roe, Langley’s center director, told a room of 280 at a Newport News hotel Thursday. "Everywhere I go, somebody comes up to me and says, 'I did an internship at NASA Langley.' " 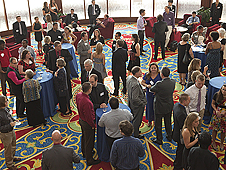 A gathering of 280 summer interns, mentors and alumni of the LARSS program exchange pleasantries at a Newport News hotel. Credit: NASA/Sean Smith 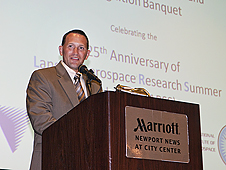 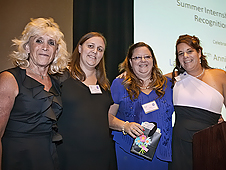 The program has grown from a first class of 20 mostly Virginia and North Carolina college students that included NASA’s chief technologist, Bobby Braun; to this year’s 200, from across the nation. From its 4,600 alumni have come people who have taken their places in some of the agency’s top programs, as well as alumni who are working with today’s LARSS interns.

"I had a choice of internships and I chose to come to Langley because I wanted to be part of NASA's mission," said Gary Fleming, LARSS Class of '91 and now chief engineer of NASA’s Clouds and Earth's Radiant Energy System (CERES) mission.

"When I got here, I worked with systems that measured aerodynamic flow properties in wind tunnels," said Fleming, who is a LARSS mentor. "You can't get that in many other places, folks. … I had access to NASA facilities, NASA people, NASA equipment and NASA technologies."

Most important, he added, was that he secured a place in the "NASA pipeline." That pipeline was referenced often at the LARSS celebration.

"It means we have a future," Roe said. "These are the people who are going to run Langley in the future."

The LARSS program was fostered by Sam Massenberg, then the head of university affairs at Langley. As is so often the case with innovation, LARSS began with just that idea and no funding.

"Sam felt strongly that we were missing an opportunity to involve students in NASA research with NASA mentors," said Ed Prior, who worked with Massenberg under Langley's chief scientist then, Bob Tolson.

"(Massenberg) asked my advice, and I told him it was a great idea but to be honest I had a lot of doubts," Prior said. "The engineers were swamped with projects, and I doubted he would get much help."

Massenberg went around the center, cobbling together enough money to get the first class of 20 to Langley. He enlisted university staff members to supplement what engineering help he could get with the mentoring.

After that first year, Prior said, Langley engineers helped to raise the money because "they liked what they had seen from the students and wanted more of them."

From that, LARSS has continued to grow, as has the mentoring staff, some of whom are former LARSS students like Amanda Cutright, an engineer who credits the program for fixing her career path.

"At this point of my career, I’m thinking about legacies," said Alan Pope, who has incorporated LARSS students in human behavior research since that first year, 1986. "I believe that more than my publications, and my patents, that the mentoring of Langley interns will be my most lasting contribution."

It was a theme of the evening, echoed by the keynote speaker, Ken Reightler, a former astronaut and current vice president for engineering services with ATK Aerospace systems.

He spoke of space shuttle missions, two of which he piloted, and of accomplishments of the program. And of criticism of NASA for ending it two weeks ago.

For all of that, though, "we needed to move on," Reightler added. "We need to build a safer, more reliable, more economical way of continuing space flight to low Earth orbit and beyond."

The inference was that he was talking to a roomful of people who could help make that happen.

Though a significant era has ended for the agency, "NASA's finest days lie ahead," Reightler said.

But only with the agency’s "pipeline" bringing a flow of people to make those days the finest.

"If you do it right, you never stop learning," said Bob Lindberg, president of the National Institute of Aerospace, which co-sponsors LARSS. "Life is a continuum of learning."

And that continuum at Langley includes not only the interns but their mentors. A byproduct of LARSS and subsequent intern programs has been enhanced cooperation and communication between Langley and the nation’s universities. Another byproduct has been energy.

"You folks, the thing you bring to Langley is vitality," Fleming told the interns. "You bring an enthusiasm that brings everybody up."