On April 15, 2011, NASA's "Future of Flight" art and design contest was closed to new entries and a few months later in June, the results were announced. 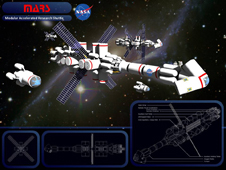 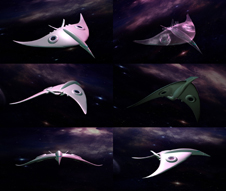 Click to enlarge
Credit: Henry Lee
> "Station 25 NOVA" (video)
Credit: Brandon Cook
Students from all over the world entered the contest, stretching as far as South Korea. NASA hosted the contest to extend a greater appreciation of the art community, specifically from the fields of science and engineering. Also, to invoke students pursuing non-science degrees to creatively consider the science and engineering aspects of the "Future of Flight" on Earth and space through an artistic perspective.

Five participants placed in the contest, having two contestants tied for second and third place respectively.

WINNER
Nathan Leber, a rising sophomore at Arizona State University, took home the top prize of the 2011 NASA Art Contest with his entry titled, "MARS Modular Accelerated Research Shuttle." Said Leber: "The real-world developments of NASA and the farsighted works of science fiction are what motivated me to create a piece that may not be possible today ... but someday ... ."

Leber finds his inspiration in the world around him. He said, "I find many fascinating spaces, textures and scenes simply through keeping my eyes open." In his free time Leber spends time hiking or camping with his family, all the while being inspired by nature’s brilliance. Leber plans to continue his architectural studies at ASU and graduate with a master’s degree in architecture. His love of the many landscapes in the desert Southwest region contribute to his aspiration to stay and work in the Phoenix area after graduating college.

SECOND PLACE (tie)
Nick Clawson, a recent high school graduate, placed second in the "Future of Flight" contest, which allowed him to utilize his creativity and develop a larger project. Before this contest, Clawson was limited to creating single scenes and stationary images. He said, "This project really pushed my limits of talent and perseverance." His hard work came together with his video entitled, "Navigating the Final Frontier." In the fall, Clawson will attend the University of Washington and major in computer science. His primary focus will be on animation.

Ben Koses, a rising junior attending West Springfield High School, earned second place for his short story entitled "The Science of Love." Said Koses: "When I saw that literature was an option for this science contest, I was thrilled." He indicated that reading and writing are two of his favorite things to do. Koses' love for books and writing stretches so far that he has already completed a novel and is looking for an agent for representation. He said, "I draw inspiration from my family and friends. They constantly give me ideas without even knowing it!" In his free time, he sharpens his writing talents with an internship he recently accepted. Koses plans "to keep writing and hopefully become a successful author. I hope to get into a good college, pass with excellent grades and pursue my dream job."

THIRD PLACE (tie)
Henry Lee, a rising sophomore at Torrey Pines High School in California, was a co-recipient of third place. Lee sought additional experience in the field of 3-D art. "I was just looking for an interesting art contest to enter; not so that I could win, but more for the experience of a contest," Lee said. His submission was "VXS-022 Manta." "I find movies to be a big source of inspiration to me," he said. "Movies such as Toy Story and Kung Fu Panda are much more interesting now that I have actual experience in 3-D modeling," Lee said. In the future, Lee hopes to attend college and have a solid career in art. Ultimately, he dreams of having a long and successful career in the field of animation.

Brandon Cook, a rising high school senior from Virginia Beach, also tied for third place for his piece entitled "Station 25 NOVA." Cook has been imaginative since he was 5 and began to sketch as a hobby. "As far back as I remember I have been driven to become the greatest artist in the world," Cook said. When he isn't sketching landscapes and futuristic spacecrafts or producing award-winning videos, Cook is creating video game content which he thoroughly enjoys. He hopes to become a video game art designer. "I want to be the creator of the world's greatest video game," he said.