When the National Advisory Committee for Aeronautics (NACA) authorized the construction of the Full-Scale Tunnel (FST) at Langley in February 1929, plans were for a facility to test the airplanes of the day.

"The pioneers that designed and constructed the tunnel had absolutely no vision of the fact that the facility would conduct continuous operations for almost 80 years on research topics they could not have imagined," said Joe Chambers, who retired as a senior manager from the NASA’s Langley Research Center in 1998 after 36 years of research in civil and military aeronautics programs. 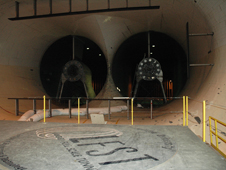 Click to enlarge
Langley's Full-Scale Tunnel has an empty interior. The wooden blades and nose cones have been removed. One set is in storage, awaiting their incorporation into Langley's first New Town building. The second set, along with Toledo scales, will be housed at the Smithsonian's National Air and Space Museum. Credit: NASA/Mary Gainer.
From the era of biplanes and on into the space program, NASA Langley’s Full-Scale Tunnel produced 796 tests within 78 years.

"Although it was a very low-speed tunnel (less than 100 mph), its large 30-foot by 60-foot test section and open throat test section (no walls in that area) led to an unbelievable scope of tests,” Chambers said.


Click here to see a test log from Langley's Full-Scale Tunnel from 1931 to 1986.
As preparation begins for demolition of the tunnel's exterior, the five-year effort to preserve its history continues.

A collection of photos, located on NASA Langley's CRgis website (http://crgis.ndc.nasa.gov/historic/643) serves as a reminder of the tunnel's massive and awe-inspiring steel framework interior.

Photos from as early as 1929 display the tunnel’s construction. A photo from 1960 places John Glenn in the Full-Scale Tunnel for Mercury procedures training. Another photo captures the tunnel’s original staff of 12 in 1930, clothed in dashing, debonair wardrobes during a time when "casual" was something of a relative term. 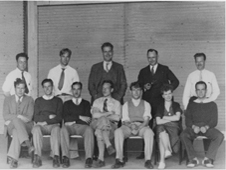 Click to enlarge
The Full-Scale Tunnel's original staff in 1930. Credit: NASA.
An upscale spirit was reflected throughout the tunnel’s early decades as it attracted pioneers and luminaries like Orville Wright, Charles Lindbergh, Glenn Curtiss and Howard Hughes.

Perhaps the most prevalent visuals of the tunnel were the two massive nose cones and wooden blades. Those propellers measured 35 feet, 5 inches in diameter, and each was driven by a 4,000-horsepower electric motor, which could circulate air through the test section at speeds between 25 and 118 mph.

According to Mary Gainer, Langley's Historic Preservation Officer (HPO), it is anticipated that one complete fan assembly, along with Toledo scales, will be housed at the Smithsonian's National Air and Space Museum.

Several wooden blades that were originally installed in 1939 will remain at Langley and will be in the new administration building, expected to be complete in 2011.

Other items that have been discovered in recent weeks were left behind in cubbyholes, such as ornate metal firehouse reels. Langley's New Town designers plan to incorporate those reels in a display. "They are something you wouldn’t normally notice, but they are gorgeous," Gainer said.

After NASA decommissioned the tunnel in 1995, ODU began operations the following year, providing engineering research facilities for graduate students and private customers in the field of aircraft and automotive transportation. ODU plans to refurbish the 1/15th working scale model and use it for teaching. 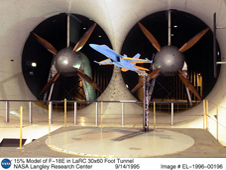 Click to enlarge
A 15 percent model of the F-18E in Langley's Full-Scale Tunnel (1995). Credit: NASA.
Interns from Langley's Environmental Management Branch have been uploading videos of testing in the tunnel to the CRgis website. Visitors can view some of the tunnel’s earliest tests, such as the National Advisory Committee of Aeronautics (NACA) test on an Albacore Submarine.

"Many of the contributions that came from tests there are well known, but our current work has collected many, many significant photos and films that have not been seen before … more than 3,000 photos," Chambers said. "Making the information available on a publically available site serves as a true ‘thank you’ to the hundreds of professional and nonprofessional personnel who worked there."

As a historian for Langley, Chambers has been inspecting files, guiding the interns, working with photos to update captions and arranging interviews with facility and topic experts.

He began his career as a researcher at the Full-Scale Tunnel in 1962 and by 1974 he was named the tunnel's lead. Now Chambers marries his experience with the other tunnel alumni whose accounts give the tunnel back its life.

Interviewees include Sam Katzoff, 101, who came to work at the FST after graduating early from Johns Hopkins University; Bill Scallion, who began his work in the Full Scale Research Division in 1949; and Clyde McLemore, former NACA employee who designed the museum and Langley-bound nose cones and propellers.


Click here to view documented accomplishments of Sam Katzoff
"The employees of the Full-Scale Tunnel were among the ‘greatest generation’ of NACA and NASA researchers," Chambers said. "No less than four members of the staff later became NASA center directors, and many more became leaders in the aeronautical industry and manned spaceflight program."

In October of 2009, special guests and tunnel alumni gathered at Langley for a final "goodbye" reception and tour of the tunnel. Its virtual doors will remain open at: http://crgis.ndc.nasa.gov/historic/643

"The Langley CRgis site represents an unprecedented opportunity for NASA to preserve its heritage in an especially informative manner for aerospace enthusiasts, historians, academia and NASA’s stakeholders -- especially the public," Chambers said. "This effort has saved a tremendous amount of material from certain destruction or discard and has collated it in a superb fashion.

"I personally hope that the site becomes a well-known national treasure that links with other historical NASA sites in a manner that makes it a crown jewel in the historical assets of the agency."