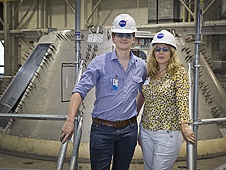 Ron Visser and Joanne Talmage collaborated to start the first For Inspiration and Recognition of Science and Technology (FIRST) robotics competition (FRC) team in the Netherlands. Credit: NASA/Sean Smith

Talmage leads the FRC team, NASA Knights, which mentors Visser, an engineering student from Fontys University in the Netherlands, and his team, The Rembrandts. Additionally, Visser is working with Talmage to help establish Team Leonardo, the new Italian team launching in 2014.

"I think it's so great that the Hampton Roads area has been able to extend its reach to Europe and help grow their STEM (science, technology, engineering and math program) through FIRST robotics," said Nancy Holloway, NASA Langley's Advanced Fabrication Processes Section Head.

FIRST teams are given the task of designing a robot within six weeks. Expectations are even greater for European teams.

They must evaluate various costs such as transportation, shipping the robot and booking a hotel. Visser sees these obstacles and plans to overcome them, while trying to implement a regional team in Europe.

Visser visited America earlier this year to attend a regional competition and gained a better perspective on how to prepare for when his team competes the following year.

"I'm happy with the progress we made so far and what we've accomplished," Visser said. "I can't wait until January - until building season - to see what we are going to do."

Apart from building a robot, cultural differences pose some challenges to the teams, such as metrics used in Europe, differences in safety and when the host parents cannot speak English.

Yet these minor barriers haven't stopped Talmage and Visser from continuing their efforts to establish international teams. One solution to the challenges is to have safety captains translate safety rules into different languages.

"There are people from different backgrounds, skill levels that come together that really don’t know each other and they have to work together," Holloway explained. "They have to budget and make smart decisions. They have a timeline they're up against. You have to find out who does what best -- you have your programmers, fabricators, and your marketing people -- all of that."

Many of the FIRST students go on to intern or work at NASA.

"This benefits NASA because right now we have four or five students from the team that are doing internships at NASA right now," Talmage said. "We've had students going through school that will come back and work for NASA or NASA contractors who work in aerospace industry.”

Visser is excited about working with the NASA Knights and hopes to earn the Rookie All-Star award and make it to nationals.

"It's amazing that an 18-year-old young man is doing all that you're doing Ron," Holloway said. "I mean, that's amazing."

Though succeeding in the competitions is rewarding, it isn't all about the win. It’s about motivating students and engaging them in STEM education.

"Our goal is basically not to win at all costs, but to inspire at all cost," Talmage said. "And inspiring people like Ron and his team to keep doing things with science, technology, engineering and mathematics."