On a beautiful Saturday set to celebrate the Earth at Sandy Bottom Nature Park in Hampton, children and their parents visited dozens of exhibits and booths in the search for answers that would fill in the blanks to a scavenger hunt. 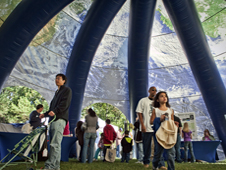 EarthFest visitors enter an Earth tent where they learned the benefits of biochar on soil and plant growth, played a memory game with clouds and measured temperature. Credit: NASA/Sean Smith
With a booklet and a small, wooden pencil received from the information booth, they let the questions lead them throughout the third annual EarthFest, hosted by NASA Langley and the City of Hampton with the support of the National Oceanic and Atmospheric Administration (NOAA).

And with each stop made through the wooded pathways set alongside a lake, the children gained an answer and a lesson.

"Why is marine debris unhealthy for birds?" one question from the booklet asked.

With a pair of pliers that represented a bird’s beak, an NOAA volunteer demonstrated how the birds often pick and eat litter they believe to be food. Three children visiting the table raced with spoons to scoop out sand, food and trash from one container to another.

"A tiny bit of food. Some sand. And a lot of trash," the volunteer said as she investigated the contents of what the children transferred. "These birds think their tummy is full of food, but as you can see, they've eaten mostly trash."

She also demonstrated the dangers of litter in the water. "Birds like to eat jellyfish, but plastic bags look like jellyfish in dark waters," she said as she spun a plastic bag around in a clear plastic bottle. "This litter on the beach and in the water is killing many of our animals."

The Friends of Sandy Bottom assisted children with making bird feeders out of milk containers that were donated by Hampton City Schools.

Many children stood in awe of the Orion Launch Abort System pathfinder, a 45-foot rocket model built by NASA. The hardware, which was built by NASA Langley, made the local news: http://www.wavy.com/dpp/news/local_news/hampton/nasa-escape-system-on-show-in-hampton

An egg-stravaganza challenge offered visitors a chance to send an egg down a zip line on a wooden shuttle. Children were given a wooden platform for their egg and a bag of supplies. Many chose to cushion their egg with paper and wrap it tightly. The eggs that landed safely won a prize.

Lessons about the air came from Richard Byles, director of education at the Virginia Air and Space Center, as he engaged children who surrounded the stage with rocketing balloons and foggy smoke rings that shot out into the crowd in a “Mysteries of Flight Science” presentation.

Also from the stage, families were entertained by live music and an animal show presented by Busch Gardens, which included a red-ruffled lemur.

As families ended their day of outdoor fun and exploration they walked away with smiles on their faces, hands full of crafts, projects, and prizes and with new knowledge to fill in the blanks.