They came to visit the usual stops visitors see when they come to NASA Langley -- the gantry, the Hangar, the Transonic Dynamics Tunnel, the 14- by 22-foot Wind Tunnel – but they also came because the Inter-American Defense College is not just about the military.

"My knowledge about NASA is not too big, but it is interesting to see how civilians are running the space program," said Air Force Brig. Gen. Roberto Rodriguez of Guatemala, chief of studies at the college, which is housed at Fort McNair in Washington. 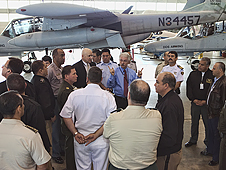 Click on the image for a larger view
"Defense is not only a military business, it's a conjunction of civilians and military, and NASA is defense, not only for America but for the globe."

The Wednesday stop at Langley was just one on a two-day tour of Hampton Roads for the 50 students, who hail from 14 countries. It was the only non-military facility visited by the group, which came to the center from the Training and Doctrine Command headquarters at Fort Monroe and visited Langley Air Force Base afterward.

"This particular year, the admiral (RAdm. Moira Flanders, director of IADC) wanted to change things up and come down to Norfolk," said Army Col. Linda Gould, deputy chief of studies at IADC. "Your part of the visit is going to make a success."

The tour is part of an 11-month program of studies at the school, which is operated under the auspices of the Organization of American States and the Inter-American Defense Board. Students include military officers, civilians and government officials, all working to learn ways to operate with each other.

The group makes three field trips. This year, it has gone to the New York to the United Nations, and also to see Columbia University and the Council on Foreign Relations; and to several South American countries.

A year ago, a trip to Atlanta included a visit to the Centers for Disease Control and Prevention.

This year, Hampton Roads, with Langley.

"The idea is not to just go to military organizations," Gould said. "The idea is to go to something totally different. Something that's unique to the government of the country we're in."

"We grew up watching on TV and in the movies this NASA name and development," said Mexican Army Col. Andres Aguirre, president of this year's class. "NASA, the name, is not strange to us. We know it represents advanced technology.

"Having this opportunity to visit a NASA installation and talk to some of the people who work here is giving us input into what this organization represents to the U.S. and also to the world. So many improvements, so many inventions come from that NASA research."

Aguirre is especially attuned to the agency. He has visited other NASA facilities, including Johnson Space Center, and his government is becoming increasingly supportive of NASA's aims.

"Just 15 days ago or a week ago, my congress passed a law giving funds to have a space agency similar to NASA," Aguirre said. "Certainly, it won't have as many resources."

"There is a great intention for us to participate in this space development. We feel we have some capabilities, especially with human resources, that might help the effort that NASA and the U.S. are doing."

There is also an awareness of NASA's work in climate change and other science initiatives, and of technology spawned by the agency.

"NASA is involved in research and education," said Rodriguez. "That's why it's an important part of our field trip."

Still, to many, NASA represents space and the future. Frankling Chang Diaz, who has participated in six shuttle missions, more than any other astronaut, is a hero in Latin America.

"My country is not too big," Rodriguez said. "Chang is from Costa Rica. Sooner or later, a guy from Guatemala, a guy from Salvador will go into space."

The perception outside the United States is that NASA represents more than just this country and that perception goes well beyond politics.

So 50 students from the Inter-American Defense College visited NASA Langley on Wednesday to gain some insight on the way things are done in a government agency in the United States.

"It helps us understand what actions we might take to support our civilian authorities in democratic values," Aguirre said. "Coming to NASA gives us an opportunity to come in contact with a different perception of development, of what technology has made before, is doing now and what it is going to do in the future.

"That research is very important for societies, for democracies. If we have a strong democracy, then in our role as advisors to our governments we will have more tools to be better advisors."