Grow Text SizeShrink Text Size
Engineer Who Opposed Challenger Launch Offers Personal Look at Tragedy
On January 28, 1986, as the Space Shuttle Challenger broke up over the Atlantic Ocean 73 seconds into its flight, Allan McDonald looked on in shock -- despite the fact that the night before, he had refused to sign the launch recommendation over safety concerns. 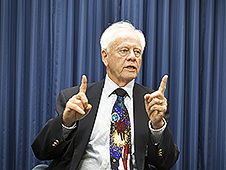 During NASA Langley's October Colloquium, Allan McDonald, a skilled engineer and executive, relives the Challenger tragedy from where he stood at the Launch Control Center. As he fought to draw attention to the real reasons behind the disaster, he experienced retribution by individuals from NASA and his employer, Morton Thiokol, Inc., makers of the Shuttle's solid rocket boosters. Credit: NASA/Sean Smith

I really believed in the program. I really felt that I understood the problem well enough. So, that after I had gotten essentially removed from my job and demoted, and went through that cycle, and then got reinstated because the pressure the company received from both the presidential commission and congress to reinstate me to my position -- which they did -- about the time the commission's report went to the president to lead the redesign. And it was a task force that was put together between NASA and the company because it had such a high priority rating to get the shuttle back into safe flight, that they asked me to lead it.

I decided that that's better then thinking about what could have been, and should have been, is make sure it never happens again. I felt very good about that with long days, and long time, and tough job.

We did a superb job. In fact, it was the most scrutinized project by the National Research Council from the National Academy of Engineering in their history. And they gave great compliments about how that program was conducted, and the results were shown by the fact that we flew 110 shuttles after that and those boosters came back pristine. In fact, they were so good, that the astronauts felt it was the safest piece of equipment on the shuttle at the end of that program. They'd rather fly those than anything.


McDonald, the director of the Space Shuttle Solid Rocket Motor Project for the engineering contractor Morton Thiokol, was concerned that below-freezing temperatures might impact the integrity of the solid rockets' O-rings.

He would soon learn that his worst fears had come true. But as he watched the Challenger disintegrate at the Launch Control Center that cold, sunny January morning, he was baffled. He had predicted that if the O-rings were to fail, the rockets would explode before the shuttle ever lifted off from the launch site. Instead, following the break-up, the rockets remained intact and continued flying.

"I was as shocked as everybody else was in the room," he said. "They couldn't believe what they were seeing -- and I couldn't either, frankly. There were a lot of people sobbing."

McDonald, who has detailed his experiences with the Challenger disaster and its aftermath in a book, "Truth, Lies, and O-Rings: Inside the Space Shuttle Challenger Disaster," was the featured speaker Tuesday, Oct. 2, at the Colloquium at NASA's Langley Research Center.

The day after the Challenger tragedy, McDonald went to Huntsville, Ala., to join the failure team. At that point, he was convinced that engine failure or a problem with the fuel tank structure was to blame.

In fact, McDonald was actually leaving the building at the Huntsville Operations Support Center to catch a flight home when someone ran out and told him he needed to come back. The man who came out to get McDonald told him that while watching films, someone from the Science and Engineering Director at Cape Canaveral had noticed that the right solid rocket had a hole in it that he suspected had caused the problem. 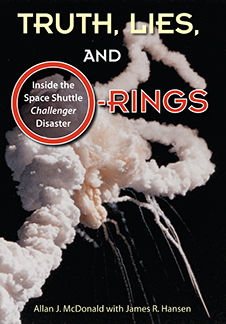 Allan McDonald's talk at NASA Langley's Colloquium on Tuesday focused on his book "Truth, Lies and O-rings: Inside the Space Shuttle Challenger Disaster." It looks at the pressures to launch the Challenger, the internal cover-ups and the aftermath of the disaster. Credit: Allan McDonald

"Tell him he doesn't know what the hell he's talking about," McDonald said. "This solid rocket isn't going to go flying around with holes in it."

McDonald relented, though, and was soon presented with indisputable evidence that the scenario he had most feared had, in fact, taken place—but in an unexpected way.

An O-ring seal had failed at launch, but the hole was quickly resealed by aluminum oxides before any flames could escape and cause an explosion. Strong wind shear that began 37 seconds into flight then tore the seal back open, resulting in the catastrophic breakup.

The following months were anything but easy for McDonald. He had to testify before a Presidential commission, during which he explained to commission Chairman William Rogers that Morton Thiokol had been so concerned about the O-rings that they recommended that NASA not launch the shuttle in temperatures below 53 degrees. They just didn't have enough data to determine if the O-rings would seal properly at lower temperatures.

According to McDonald, Rogers' response was: "If I heard what I think I heard, this will be in litigation for years to come."

"My life changed when he said that," said McDonald. Realizing that he would be at the center of much of that litigation—including litigation from the families of the astronauts—McDonald decided to keep detailed written records of the events leading up to the launch and the long aftermath. He ended up with 1,400 pages of handwritten notes.

"Twenty years later I was up in my attic cleaning out some stuff," he said. "It was probably 120 degrees up there. And I opened this box and started reading and said, 'Oh my God, this would make a real good book.' "

In his book and lecture, McDonald talks about being removed from his job and demoted in the wake of the Challenger incident. His decision to tell the truth was not taken well by his employers. But the Presidential commission eventually vindicated McDonald, who chose to stay on with Morton Thiokol. He was reinstated to his position and put in charge of the redesign and requalification of the solid rocket motors.

"I decided that that's better than thinking about what could've been and should've been—is to make sure it never happens again," he said. "And I felt very good about that."

The resulting improvements led to 110 shuttle missions in which the boosters came back pristine. McDonald says that because of the improvements, shuttle astronauts felt that the boosters were the safest piece of equipment on the shuttle. That was a rewarding result for McDonald, of course, but also emotionally therapeutic in light of the Challenger accident.

In his lecture, McDonald, who retired from ATK Thiokol Propulsion in 2001 as vice president and technical director for advanced technology programs, discussed some of the important lessons that have come out his experiences. He placed particular emphasis on communication.

"In my career, I don't know how many times people have raised their hand and said, 'This may be a dumb question, but…' I always stood up and said, 'In my entire career I've never, ever heard a dumb question. I've heard a lot of dumb answers," he said.

He also emphasized the importance of feeling comfortable speaking up and offering one's professional opinion. He illustrated that point—and laced it with a bit of humor—when discussing his fateful choice not to sign the launch recommendation.

"I made the smartest decision I made in my lifetime -- I'd say second smartest if my wife was here," he said.