NASA's Cloud-Aerosol Lidar and Infrared Pathfinder Satellite Observations (CALIPSO) satellite captured an image of Iceland’s volcanic ash cloud April 17 as it drifted over Europe. Unlike other satellites that provide a bird’s-eye view of the ash cloud’s horizontal spread, CALIPSO provides a vertical profile of a slice of the atmosphere.

In the image, the ash cloud of the volcano, Eyjafjallajokull, is seen above Paris as a thin, wispy layer of particles ranging in altitude from 6,000 to 21,000 feet. To compare its altitude and breadth, see the clouds over Northern Europe, some of which are so thick that they block the penetration of light from CALIPSO’s lidar to the surface. The yellow layer near the surface over France is believed to be primarily air pollution, but could also contain ash from the volcano.

Highlighting its ability to capture high-resolution data of the atmosphere, CALIPSO on April 15 detected remnants of the Eyjafjallajokull cloud drifting as high as 30,000 feet above sea level.

CALIPSO uses an innovative lidar, or pulsating laser, to see aerosols (small particles such as dust, smoke and pollution) and thin clouds often invisible to radar and the human eye. The CALIPSO mission is led by NASA's Langley Research Center.

CALIPSO's lidar sends a series of short light pulses down through the atmosphere, and a fraction of them return to the satellite. The strength of the returned signal reveals the characteristics of the cloud and aerosol layers that lie below. The time required for the signal to travel down through the atmosphere and return to the satellite is used to construct a vertical map showing locations of clouds and aerosols.

CALIPSO is joint mission between NASA and CNES, the French space agency. 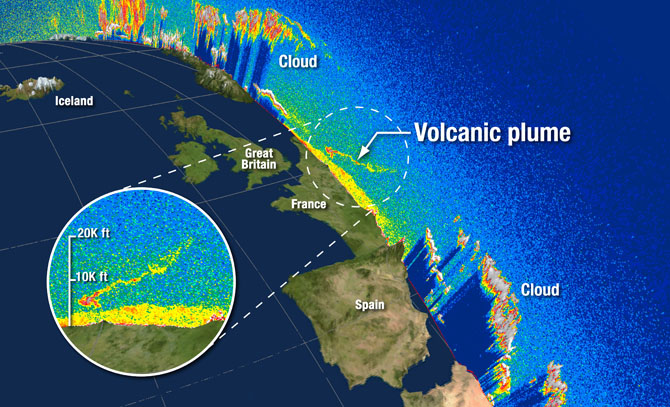