William Borucki has always been fascinated by space. On Friday nights as a child, he would visit the Yerkes Observatory, home of the largest refracting telescope in the United States, which was a short bicycle ride from his home in Wisconsin. 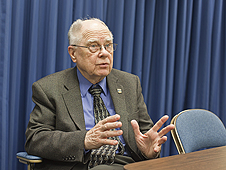 William Borucki is the Science Principal Investigator for the Kepler Mission that is designed to determine the frequency of terrestrial planets orbiting in and near the habitable zones of other stars. Credit: NASA/Sean Smith

As the Kepler Science Principal Investigator at NASA's Ames Research Center, he continues to look into space – hoping to answer many of the questions he pondered while looking through a telescope as child.

Are there other worlds similar to our own?

And if so, is there or could there be life on them?

The Kepler Mission was specifically designed to survey our region of the Milky Way galaxy to discover evidence of Earth-like planets in the habitable zone (HZ) of Sun-like stars.

It's what Borucki described as a "foundation" of research for future generations – for other curious children who wish to build upon the knowledge gained through the Kepler Mission.

"The children are the people who will determine the next steps," Borucki said.

He presented a Colloquium lecture at NASA Langley on Tuesday titled, "The Kepler Project: The Search for Earth-like Planets Around Other Stars," to an audience consisting mostly of student interns.

Borucki explained that the Kepler instrument is a specially designed 0.95-meter diameter telescope called a photometer or light meter, an instrument that measures the brightness variations of stars. The photometer features a focal plane array with 95 million pixels. The focal plane array is the largest camera NASA has ever flown in space. 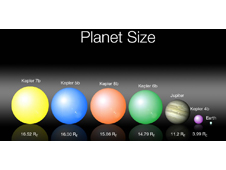 Borucki described the 2009 Kepler launch as the "one of the most exciting times of my life." Results from this mission will allow the science mission team to place our solar system within the continuum of planetary systems in the Galaxy.

Since the launch, several large planets have been confirmed with the data obtained during the first 43 days of transmission, including four planets that are larger than Jupiter, one that has a density of 0.147.

"That's a lower density than cork [0.147] … it's the density of styrofoam," Borucki said. "Astronomers are having a grand time trying to study the data we are getting."

The Kepler science mission team is having a grand time with the data as well. The system is designed to find hundreds of thousands of planetary candidates. According to Borucki, those candidates are narrowed down to several hundred and then ground-based telescopes rule out all possibilities.

"Most candidates will be a false positive," Borucki said. "It's quite a task."

After crunching more data this summer, Borucki expects more Earth-like planet confirmations. He does not yet wish to form an opinion about whether or not they will have life on them.

“For scientists, it’s not important to talk about what you think, but rather, what does the research tell you?” he said.

"By 2013, Kepler should determine whether Earths in the HZ of other stars are common or rare," Borucki said. "This is an important precursor for a successor mission."

He added: "It will also determine the fate of Star Trek."