In a matter of hours, one million gallons of water filled a giant reservoir that will play a critical role in NASA's future human space flight efforts. 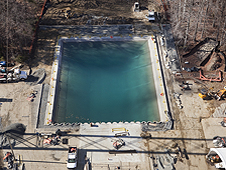 Click to enlarge
The next step for the Hydro Impact Basin will be to pass a series of review processes, starting with an Integrative Systems Review ISR scheduled for spring.

"It was such a feeling of accomplishment to see our plan become reality," said Lynn Bowman, who is the SPLASH project manager for the basin. SPLASH stands for Structural Passive Landing Attenuation for Survivability of Human-crew.

Construction on the basin continued nonstop through the heat of the summer, through rainstorms and snowstorms.

"The crew worked nights and on weekends to get it finished," Bowman said. "Hats off to the Center Operations Directorate and the subcontractor team for their outstanding efforts making the basin a priority."

The basin is located at the west end of Langley's historic Landing and Impact Research Facility, known as the Gantry – where Neil Armstrong trained for walking on the moon. It will be used to validate and certify space vehicles – such as the Orion crew module – for safe water landings.

"This is a very important capability for the agency and for the country overall in terms of aerospace safety," Bowman said. "The Gantry provides the ability to control the orientation of the test article while imparting a vertical and horizontal impact velocity, which is required for human rating vehicles."


The skill sets that NASA Langley engineers and technicians bring to the table as well as the capability of the Gantry are two of the reasons the basin was built at the center.

Even vehicles that do not perform a nominal water landing will need to certify for launch abort landings into water.

The next step for the basin will be to pass a series of review processes, starting with an Integrative Systems Review ISR scheduled for early February.

"We have new systems in place, and we have to make sure they work as we predicted," Bowman said.

Testing, which will include water impact dropping of different configurations of an Orion boilerplate test article, is scheduled to begin late spring.