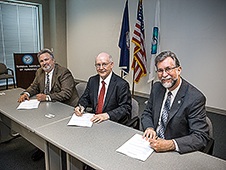 Are you "down" with BNNT?

Because fibril boron nitride nanotubes (BNNTs) production will be up and running.

A technique for synthesizing the BNNT material technology, jointly developed by NASA Langley Research Center, the U.S. Department of Energy's Jefferson Lab, and the National Institute of Aerospace (NIA), was recently licensed by BNNT LLC of Newport News, Va.

In a signing ceremony on March 22 at the NIA, BNNT LLC acquired the intellectual property rights for making the material available for scientific and commercial research, development and products.

Only small quantities of the material have been available outside of research labs since it was first produced in 1995. With advanced techniques, BNNT LLC hopes to improve current production rates by a factor of 100.

"We hope to produce the quantity, quality and price that is of interest to our customers," said chief executive officer and BNNT LLC president R. Roy Whitney.

Structurally similar to carbon nanotubes, the strong and versatile microscopic tubes whose diameter is measured in nanometers (a nanometer is one billionth of a meter/39 inches), Fibril BNNT has a variety of properties attractive to the research and commercial industry.


"It doesn't stop with BNNT. There are other nano-materials that will come out of this same technology that are very significant to mission applications," said Catharine Fay, NASA Langley's BNNT program manager and a senior materials engineer. "BNNT happened because a whole bunch of folks worked on the science and inventions, licensing, tech transfer; that is what is important."

The BNNT materials have a piezoelectric function -- meaning it creates electricity resulting from pressure. Combined with its ability to be used in extreme temperature environments (up to 800 C or 1472 F) and their radiation-shielding ability against neutron and UV radiations, NASA hopes that the energy-harvesting aspect of BNNT-based materials will make aerospace missions safer and longer by providing auxiliary power for electronic devices and health monitoring systems.

"Welcome to a signing ceremony that has been a long time in contemplation, " said Robert Lindbergh, president and executive director of the NIA. "Not the simplest of agreements in that there are three parties to the ownership and a fourth party now ready to license this – probably the most significant piece of intellectual property that we've licensed in our nearly ten years of existence here at the NIA."