Grow Text SizeShrink Text Size
What It's Like to Be an Astronaut
By: Mike Finneran

Charles J. "Charlie" Camarda is one of NASA Langley's own astronauts. He joined the center in 1974, armed with a degree in aerospace engineering from the Polytechnic Institute of Brooklyn.

He started as a research scientist in the Thermal Structures Branch and was responsible for demonstrating the feasibility of a heat-pipe-cooled leading edge for the space shuttle. When he left Langley 22 years later, it was for astronaut training at NASA’s Johnson Space Center.

Camarda was blasted into space on the first shuttle mission after the Columbia accident in 2003. STS-114 was the "Return to Flight" mission in which the shuttle Discovery docked with the International Space Station, and the crew tested and evaluated new procedures for flight safety and inspection and repair techniques.

It was a two-week, 5.8-million mile journey, and when it was over, Camarda didn't look back.

"Been there, done that," said Camarda, who remains with NASA at Johnson. He perhaps was nearly as excited to toss out the first pitch at Shea Stadium in his hometown Queens, N.Y., a few weeks later.

I chose to become an astronaut for several reasons: it was a childhood dream; after working in several engineering disciplines (research, analysis, design, test, etc.) I wanted to understand the operational implications of real space hardware design firsthand; as a personal test/challenge (after all I was claustrophobic, afraid of heights and a very poor swimmer); and last but most important, to serve as a model for my young daughter to teach her the importance of following her dreams, facing her fears head on and not being afraid to take chances. 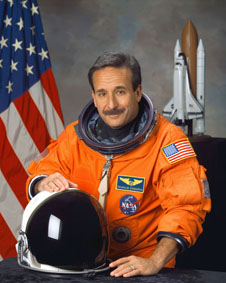 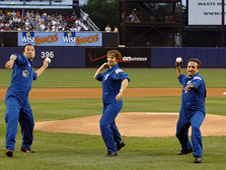 Among the perks of being an astronaut are throwing out the first ball at a major league game, done here at a Mets game by STS-114 astronauts (left to right) Soichi Noguchi, Eileen Collins and Charlie Camarda. Credit: NASA


I applied to be an astronaut when the first call for mission specialists was advertised in 1978. I reapplied 18 years later and was selected in 1996, Astronaut Class 16.

Let me tell you what it is not like to be an astronaut:

It is not all glory, games, fun and adventure. When you are first selected, you get to tour the country and visit all the NASA sites and get to bond as a class and future team. You are in the limelight and are treated like royalty for a brief period of time -- and then the real world kicks in and you start training. Training, training, training: survival (water, land, winter, you name it), shuttle systems, space station systems, Russian segment systems, expedition, rendezvous and docking, extra-vehicular activity (spacewalk), robotic arm, etc.

You are not recognized for your accomplishments, whatever you thought they might be. You quickly realize that whatever you thought your status in life was before you entered the corps, you are now a "freshman" all over again, at the bottom of a very long line of astronaut candidates who know “nothing” and have to be trained and retrained for years.

Also, if you happen to be a mission specialist, there is a special place reserved for you at the very back of the line. After the first year of training, you are never really quite sure why you were ever selected in the first place. Not being a military person and very possibly the furthest from what one would consider military material, I just assumed this was probably part of the breaking down before they started the building up process. I was correct, I think, however I did not realize the process would take so long.

Your technical expertise is really not that important. You are trained to operate very complex hardware and to do it flawlessly; however, you do not have to have a PhD, MS or, quite possibly, even a BS degree to do so. You are taught to religiously follow checklists to diagnose vehicle and equipment health and to respond quickly, especially during the dynamic portions of flight, to either correct or safe the situation to prevent loss of mission or life.

In fact, at most Monday morning meetings in the Astronaut Office it was frowned upon to delve too deeply into the technical details. During one of my performance evaluations I was told I received a poor rating from one of my branch heads. I asked the then-head of the Astronaut Office, "What, that’s news to me; what did I do wrong?" He told me my branch head rated me down because "I had a low tolerance for stupidity." I told him I was going to do better and that next year he would see a change. I was going to embrace the stupid! But there are some fun, games, glory and adventure.

You get to fly backseat in T-38 jets with the best fighter pilots in the world, doing every conceivable aerobatic maneuver out over the Gulf of Mexico, formation wingtip-to-wingtip across the country and, every once and a while, a real in-flight emergency procedure (cabin depress, loss of hydraulics, engine flameout at altitude, etc.).

Training includes EVA work in the Neutral Buoyancy Lab, scuba diving, rappelling down the side of canyon walls in Utah, training at minus-40 degrees in Cold Lake, Canada; Russian Soyuz training, Russian survival. You are a bit closer to real "survival" training when the Russians do it. You even get to shoot their Swiss Army-like gun that shoots small shotgun-like cartridges, shells, night and day flares and even converts into a machete for chopping trees.

Oh yeah, then you get to blast off from the cape and work really hard and have lots of fun in zero-G! Then you come home, go to several Super Bowls on the field for opening ceremonies, toss a few opening game pitches (Astros, Mets), be on stage with Paul McCartney, toss a few tennis balls into the stands at the U.S. Open, meet President and Mrs. Bush in the White House, etc.

Then there are the people.

When people ask me what I liked most about being an astronaut, I say it’s the people. Working hard, training hard and playing hard with some of the finest people in the world from countries all over the world (we had nine international astronauts from seven different countries in our class). Meeting and working with all the wonderful people who really make spaceflight happen and who keep us safe and who do it all for seemingly little reward keeps you humble and makes you realize how insignificant your role is. Just hang onto your seat as you careen into space and follow their every instruction, then reap all the glory when you return home.

I could go on but I think you get the point!

How has it changed your life, professionally and personally?

Unfortunately it has not changed me one bit, I am still the same straight shooter with a low tolerance for stupidity. As my good friend from Langley, Pete Jacobs, would say, "I only open my mouth to change feet."

How did being at NASA Langley contribute to your becoming an astronaut?

What is your most memorable moment as an astronaut?

Unfortunately my most memorable moment as an astronaut is not a pleasant one. I was training in Russia when we got the call that Space Shuttle Columbia broke up over Texas during Earth entry and the crew was lost. I lost seven friends, three of them my classmates.

What advice would you give children who want to be an astronaut?

Follow your dreams and choose a career that you have a passion for, and hopefully it will align with a need the Astronaut Office is looking to fill at that point in time. Your passion will ensure you will devote the hard work necessary to rise to the top of your field. It will also ensure that you will always be happy and never “work” a day in your life, even if you do not have the opportunity to fly in space. Keep in mind, however, that the advent of true “commercial” spaceflight may afford you many more opportunities to fly in space than what we have today!

What direction do you think NASA should take at this point?

I believe NASA is struggling to turn toward research and development, science, technology and innovation. A risk-averse, “failure-is-not-an-option” environment has to give way to a psychologically safe environment in which failure and risk taking are not only options, they are celebrated as necessities for innovation and progress to occur. Cultural change can happen quickly.

Do you have a hobby or special activity or interest that you’d like to mention?

My latest hobby is educational outreach and helping to create tools for creative problem solving and virtual collaboration. The children are our future and our hope. It is not a coincidence that the glory years of both NACA and NASA occurred when the average age of its researchers was about 26!

I have had a very rewarding life, beginning with my career as a research engineer at NASA Langley. I was fortunate to have world-class mentors, colleagues and friends who have helped me learn the craft of engineering and who taught me what it truly means to be an engineer and a researcher; giants of the aeronautics and aerospace field of the highest integrity and held with the highest regard and respect.

I was protected by a culture where “permission to fail” was a guaranteed and necessary right - one that ensures humility for what is not known, and which instills a thirst for knowledge and understanding gained by rigorous analysis, correlated by test.

I was allowed much freedom at Langley and was able to gain experience in many aspects of the field of engineering including analysis, design, and testing. I headed the Thermal Structures Branch at NASA Langley before I left to become an astronaut. It was the highlight of my career as a researcher. I was proud to serve a group of the finest researchers of multiple, diverse engineering disciplines and work on some of the most complex and challenging technical problems of hypersonic flight and human spaceflight.

It was in this branch that I learned the skills and craft of innovative conceptual engineering design and a Skunk Works-like methodology for solving problems by failing and learning "fast and furious." Skunk Works (a Lockheed Martin group responsible for a number of famous aircraft designs) really defines a work ethic steeped in experiment and the "cut and try" methods used by the first engineers of the National Advisory Committee for Aeronautics (NACA, NASA’s predecessor agency), who helped this nation regain the lead in aeronautical engineering at NASA Langley.