The future of aerospace and aviation hinges on two things, political support and funding. The governor's Aerospace Advisory Council can provide both, and on Tuesday NASA's Langley Research Center hosted the council's quarterly meeting at the center. 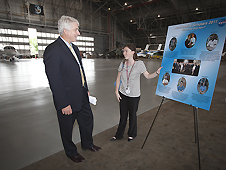 State Sen. Mark Herring spoke with student Megan Kinney about her time at Langley during the Aerospace Advisory Council's tour of the center. "I wanted them to take away how much my time at NASA has meant to me," Kinney said. "It really ignites my passion for research." Credit: NASA/Sean Smith

Their primary goal is to make Virginia one of the top supporters of the aerospace industry in the country.

Tuesday was the council's first visit to Langley and included a tour of center facilities along with its meeting. The main topics covered developments happening both at Langley and NASA Wallops, as well as goings-on in the world of aviation and aerospace.

Deputy Center Director Steve Jurczyk gave a rundown of Langley's operations, noting the great strides made in research around the center. He also detailed the center's revitalization project, portraying Langley's precise 20-year plan for the future.

"The plan is completely comprehensive, covering every square foot of every building on the center," Jurczyk said during his presentation.

Even more important than the topics covered in the meeting was the council's tour.

"(Having the meeting at Langley) is great for the center," Jurczyk said, "And the tour helps them finally see what they’ve been talking about in meetings for months."

The group first traveled to the Langley hangar, where they were met by employees and Langley's Aeronautics Academy students. There, the focus was the future of aviation, which included a presentation by the students and an overview of the In-Trail Procedures (ITP) project. The ITP research intends to reduce the separation needed between planes flying in oceanic airspace.

The highlight of the stop was a tour of the hangar floor where the group was met with exhibits illustrating the future of unmanned aerial vehicles and overviews of the students’ projects.

State Sen. Mark Herring of Fairfax and Louden Counties came away from the hangar particularly impressed.

"It is exciting to see research being done at NASA Langley today that will change the face of tomorrow," Herring said after touring the facility.

Science Directorate team leaders Neil Cheatwood and Mary Beth Wusk then met the council in building 1250, giving them an overview of the future of space technologies produced at Langley.

Their main presentation was on the Inflatable Reentry Vehicle Experiment (IRVE-3). Developed by Wusk and her team, IRVE-3 is an effort to prove the viability of inflatable technology to survive atmospheric entry. The inflatable spacecraft technology is scheduled to launch from Wallops later this summer.

The council also saw the Stratospheric Aerosol and Gas Experiment (SAGE III). SAGE III is the third in a line of instruments that monitors the Earth's atmosphere, and is scheduled to travel to the International Space Station later this year.

The council was then briefed on the status of the commercial space flight industry and its importance to both the national and state economy at the Transonic Dynamics Tunnel. After the briefing, they received a tour of the tunnel to conclude the tour.

"I'm so glad that the members of the council not from the area finally get to see NASA Langley," state Del. John Cosgrove said in the meeting’s closing remarks. "It's the coolest place and we want to do everything we can to support it."