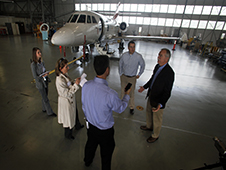 Associated Press and Daily Press reporters on the left ask Bruce Anderson and Richard Moore on the right, about the ACCESS project, which involves the HU-25C Guardian airplane. Credit: NASA/Dave Bowman

"We're interested in differences caused by different fuels, as well as just trying to understand better the physics and the chemistry of exhaust plumes," Anderson said during a media event that highlighted how ACCESS is studying the effects of alternate biofuel.

The experiment involved flying a NASA Dryden Flight Research Center DC-8 airplane as high as 39,000 feet while Langley's instrumented HU-25C Guardian, a versatile research plane, trailed behind at distances ranging from 300 feet to more than 10 miles.

"This is kind of a unique experiment," Anderson said. "You don't often get that close to another aircraft."

During the flights, the DC-8's four CFM56 engines were powered by conventional JP-8 jet fuel, or a 50-50 blend of JP-8 and an alternative fuel of hydroprocessed esters and fatty acids (HEFA) produced from camelina plant oil. More than a dozen instruments mounted on the Guardian jet characterized the soot, gases and ice particles streaming from the DC-8.

As Anderson explained, the FAA and other governing bodies have certified commercial airlines to fly using 50-50 fuel blends. NASA has been evaluating bio-created kerosene that can be blended with jet fuel to be used in the near-term as a substitute for alternative to petroleum. 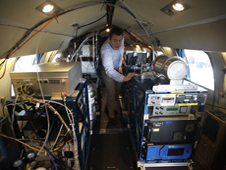 Rich Moore squeezes through the instruments aboard the HU-25C Guardian. The HU-25C has more power, can fly higher, faster, further, long and can can carry more weight than any other NASA Langley aircraft. Credit: NASA/Dave Bowman

"NASA's focus is renewable fuel, such as camelina or fuel from algae," Anderson said.

It's been 17 years since this type of flight experiment took place.

"We had much better instruments this time so and some of the questions have changed," Anderson said. "People know more about the atmosphere and about how radiation is transmitted through the atmosphere."

As the questions died down and visitors began to exit, Dale Bowser, chief of aircraft maintenance, explained that after a window calibration and fit check for SCIFLI (Scientifically Calibrated In Flight Imagery) on Friday, all of the instrumentation will be stripped from the interior and exterior of the plane as the HU-25C is prepared for GEO-TASO, a Ball Aerospace airborne sensor and retrieval project for air quality measurements.

With some interviews lingering on, it was already back to business as usual in the hangar as Langley's B200 and UC-12 aircraft landed and rolled in following flight tests of an experimental vision system.

Around the December time frame, the ACCESS instrumentation will be reinstalled to the Guardian.

A second phase of ACCESS flights is planned for 2014, which will capitalize on lessons learned from this year's flights and include a more extensive set of measurements.