This method can stabilize a catalyst, or materials that combine and react, in virtually any application that requires the removal of toxic compounds, including carbon monoxide. Unlike a conventional catalyst, this technology has low, near-room-temperature oxidation capabilities that are maintained up to temperatures greater than 800 degrees Celsius, or about 1472 degrees Fahrenheit. 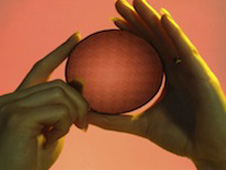 It could be used for mining, power generation, construction, locomotive, forestry, and marine applications. It may also be used in personal safety equipment, as well as detection schemes, to produce low-cost chemical sensors for the trace detection of pollutants.

It has immediate aerospace applications, including green aircraft, cabin and habitat air purification, as well as other trace contaminant elimination from life support systems. This catalyst can also be used for cabin air quality during long-duration space flights.

Current catalyst systems cannot change the state of carbon monoxide (CO) and hydrocarbons (HC) in such a wide range of temperatures. The NASA Langley-developed technology can, and it is capable of removing other volatile compounds, such as formaldehyde, and nitrogen oxides from exhaust streams.

The buildup of contaminants, such as CO and HC, occur through the natural operation of machinery. Traditional technologies employ filters to remove these molecules, which become saturated and have to be replaced. But this technology can be used for longer time periods since the molecules are converted to carbon dioxide, which requires less system maintenance. 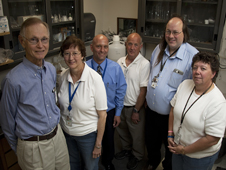 This technology can be used to remove pollutants from environments such as ground and flight vehicle engines that operate on fuels, such as diesel, natural gas and alcohol fuels. It has many other engine applications, including smoke stacks.

"The fact that it can operate over a very wide temperature range lends itself to applications from lawn mowers and weed eaters to, potentially, jumbo jets," Watkins said.

This new production approach incorporates at least one additional metal oxide species. The oxides stabilize the active tin oxide layer during a high-temperature operation in a reducing environment, such as vehicle exhaust.

Working together was the easy part.

"The team worked very well together and was made up of chemists, engineers, technicians, as well as experts in automotive catalyst formulations and materials science," Watkins said. "It was an eclectic gathering of talents that were essential for the success of the program."

At the center, LTOC systems have continued to progress for about 20 years.

"The entire team was very happy to fare this well in the field of potential winners," Watkins said. "It was very gratifying to see this as a culmination of an effort that began because someone wanted to buy a CO2 laser, and morphing into a product that can improve the working environment in many different areas."

Since it can be used in any application requiring an internal combustion engine, they look forward to seeing how their technology is applied – some applications may come with an element of surprise.

For more information on this technology and other Langley technologies, please visit:
http://technologygateway.nasa.gov/