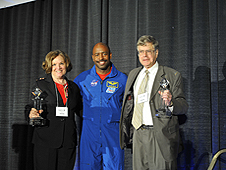 Astronaut Leland Melvin present Arlene and Joel Levine with the National Alliance of Black School Educators (NABSE) Presidential Award. Credit: NASA.
Seven years ago Joel and Arlene Levine noticed there wasn't much diversity in the NASA audience during a space shuttle launch; and they decided to do something about it.

Along with the support of the National Alliance of Black School Educators (NABSE), the Levines submitted a proposal to NASA Headquarters' Planetary Exploration Division to develop a program of interactive lectures on atmospheric and planetary science that would target African-American students across the country. The goal was to acquaint minority students with NASA programs and motivate them to pursue NASA-related careers, as well as to promote science literacy. For this continuing education and outreach activity, the Arlene and Joel Levine just received the NABSE Presidential Award at the 38th Annual Meeting of NABSE in Fort Worth, TX. NABSE invited the NASA Associate Administrator for Education and former Astronaut, Leland Melvin, to present the award to his former Langley colleagues and personal friends, Arlene and Joel Levine.

The program got its start at NASA Langley in 2005 and was broadcast through a video teleconferencing system to schools identified by NABSE. Since then, the program has evolved and is now broadcast throughout the country through NASA's Digital Learning Network. Joel Levine gives the lectures and Arlene Levine works behind the camera and coordinates with NABSE.

"By working with NABSE, we ensure that schools that include underrepresented minorities are targeted, but these lectures are open to school systems nationwide, regardless of the racial population of the schools," said Arlene Levine. "NABSE includes Hispanic student populations as well as African-American student populations." Joel Levine added, “Now that the U.S. has established as a national goal to send humans to Mars and return them safely, we clearly need the brain power of the best and brightest that our nation has to offer. This means we must engage former underrepresented student populations in science and engineering disciplines.

+ Return to the Researcher News