"John Allen had a lot to do with that," Gustaferro mused.

In the late 1970s, Allen, who passed away on April 20 after a long bout with cancer, was project manager of Large Space Structures, a NASA group based at Langley that coordinated much of the agency's research leading up to the Space Station. 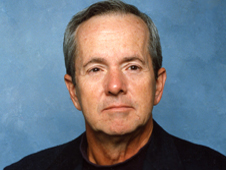 A celebration of life service for John Allen will be conducted at 1 p.m. on April 27 at First Baptist Church of Newport News, with a reception to follow.

Click image to enlarge
A Newport News native, Allen spent his early years at Langley as a system engineer on the development, testing and flight operations of the Scout launch vehicle.

After retiring from NASA midway through the 1990s, he worked as a contractor, advising the Science Directorate on instruments for astrophysics, planetary and Earth science projects.

Allen spent his retirement years with the Christopher Newport University Lifelong Learning Society as its president. He also was a docent at the Virginia Air and Space Center, and reviewed books for the Daily Press.

He also spent time with music, sculpting and painting.

"He truly was a Renaissance man," Gustaferro said. "He was gregarious and humorous in his daily life and accepted the challenge of battling his cancer with knowledge and determination."

Allen was preceded in death by his parents, John L. Allen Sr. and Frances Monfalcone; and a brother, Fred Allen. He is survived by wife Mary Fannon Allen; two daughters, Sabrina Barnes and husband Hal of Smithfield; and Heather Eggleston and husband Shawn of Dumfries; two brothers, Charlie Allen and wife Sonja, and Richard Allen, both of Newport News; and a sister, Fay Andrashko and husband Gary of Irvington.

A celebration of life service will be conducted at 1 p.m. on April 27 at First Baptist Church of Newport News, with a reception to follow.