Gottlieb, who was born in Tel Aviv on the Nov. 14, 1944, and was educated at Tel Aviv University, started his association with NASA Langley in 1974 as a visiting scientist to the Institute for Computer Applications in Science and Engineering (ICASE). During this first visit, one of many over the next 34 years, he worked with members of the Fluid Mechanics Branch on a numerical study related to supersonic jets. During this first visit to Langley, Gottlieb also began research on higher order methods for hyperbolic equations. His interest in higher order methods was motivated by his believe in the need to study time-dependent problems and to resolve finedetails of a flow field, rather than just its gross feature. This area of research would remain the primary focus of his many scientific contributions. 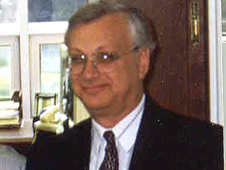 He joined the Division of Applied Mathematics at Brown in 1985, with the task of developing what would become a very successful program in numerical analysis and scientific computation for partial differential equations.

Widely known for a very broad range of contributions distributed in more than 125 scientific articles and two books, he was best known for his fundamental contributions to the development of high order and spectral methods for the numerical solution of partial differential equations. Gottlieb was one of the founders of the International Conference on Spectral and High-Order Methods (ICOSAHOM), which remains the premier international conference in this area of research, drawing attendees from every corner of the world.

Among his many honors were honorary degrees from the University of Paris VI and the University of Uppsala, memberships in the American Academy of Arts and Sciences and the National Academy of Sciences, and designation as the John von Neumann Lecturer by the Society for Industrial and Applied Mathematics in 2008.

To allow the very large community of friends and colleagues to share thoughts, anecdotes, stories with his family and the community, there is a blog at https://wiki.brown.edu/confluence/display/appmath/David+Gottlieb