Grow Text SizeShrink Text Size
Lee H. Person, Jr.
One of NASA Langley Research Center's best-known research pilots has died at the age of 79, after a series of health problems. Lee H. Person, Jr., of Yorktown had retired from the Hampton facility in 1995. Prior to that he spent more than 30 years at NASA Langley making significant contributions to both aeronautics and space research. Person was inducted into the Virginia Aviation Hall of Fame last year for his extensive roles in improving aviation safety and advancing aeronautics research. 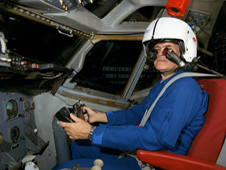 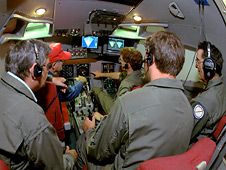 In the 1980s and '90s, with Person as chief test pilot, NASA Langley spent six years developing radar to combat potentially deadly wind shear. He and fellow pilot Dick Yenni, now retired and living in Williamsburg, Va., flew a specially equipped jet into hazardous weather to test the technology. Their work led directly to the hardware and procedures used by today's transport and general aviation pilots to avoid dangerous and potentially fatal encounters with wind shear.

Person was also a part of NASA's historic moon landing research. He tested a number of one-man lunar flying devices and worked on orbital missions and space station rendezvous simulations. Chief among his space research tasks was Gemini -- Lunar Excursion Module docking simulations, flying lunar landing simulations and participation in the development of the Rendezvous and Docking Simulator at Langley.

Person worked with all of the Apollo astronauts before they went to the moon. They would come to NASA Langley to train at what was then the Lunar Landing Research Facility. Person and a team of Langley engineers would talk to them, watch them fly and get their comments so they could improve the design of the lunar lander.

Person also did pioneering work in the use of in-flight thrust vectoring in close air combat for military fighters and in advancing modern "glass cockpit" design for aircraft. He flew more than 100 different types of aircraft and rotorcraft during more than 10,000 flight hours.

Lee Person was born in Baton Rouge, La., in 1932. He received a commission in the U. S. Marine Corps and served as a fighter pilot and tactics flight instructor until he was released from active duty in 1958. Person earned a Bachelor of Science degree in mechanical engineering from North Carolina State University and joined NASA’s Langley Research Center in 1962, where he was the author and/or co-author of 36 technical publications on results of his research efforts.

Person was a graduate of the U.S. Naval Test Pilot School and a member of the Society of Experimental Test Pilots. In recognition of his outstanding contributions to NASA and aviation research, he was awarded numerous awards including the prestigious IR-100 Award for development of an innovative Takeoff Performance Monitoring Systems (TOPMS) to enhance safety of airliners, and a NASA Group Achievement Award for demonstrating the concept of Vectoring in Forward Flight (VIFF).

He also received the NASA Exceptional Service Medal for internationally-recognized contributions that advanced the state-of-the-art in pilot/vehicle/air traffic control technology, and for outstanding service as a research test pilot in critical programs, including the inter-agency wind shear program.